Clashes followed a stringent curfew witnessed in India-administered Kashmir on the first death anniversary of Burhan Wani whose killing sparked an outpouring of grief and anger leading to months-long violent protests in 2016.

India on Saturday imposed a widespread curfew, cut off all internet services and deployed thousands of troops in Kashmir as the volatile Himalayan region marked the anniversary of a hugely popular rebel leader's death.

Residents said that the restrictions on movement were some of the strictest they had seen, with some villagers told they would be shot if they left their homes.

Thousands of troops have fanned out across the disputed territory after pro-independence leaders - most of them arrested or detained - called for a week of demonstrations to mark the first death anniversary of Burhan Wani.

As curfew and severe restrictions are imposed all over, #Kashmir today remembers #BurhanWani his associates & over 120 civilians Killed....

Kashmir has seen an explosion of protests against Indian rule since then.

The death of the charismatic 23-year-old, who had built up a big following on social media, sparked an outpouring of grief and anger that spilled into the streets and led to months of clashes with security forces.

Over 100 people were killed, most of them protesters or bystanders, in the months that followed and many more sustained serious eye injuries from the controversial pellet guns used by Indian paramilitary and police to quell the protests.

All roads leading to the rebel leader's home town of Tral in south Kashmir have been closed and authorities have seized thousands of motorbikes to prevent people travelling between villages in the area.

Witnesses and police said clashes broke out when protesters tried to reach the family home on Saturday morning and were blocked by government forces.

Wani's father said there was a huge military presence outside the family home.

"There were so many soldiers outside I couldn't go out. It wasn't possible for me to visit my son's grave today," Muzzafar Wani said.

Kashmir, divided between the nuclear rivals since 1947, was declared as the "planet's largest militarised territorial dispute" by the Guinness Book of World Records in 2009.

The mountainous region is home to over a dozen rebel groups fighting for independence or the unification of the territory with Pakistan.

But since Wani's death, civilians have played an increasingly active role in the rebellion against Indian rule.

In parts of south Kashmir - the epicentre of the renewed rebellion - villagers began intervening in anti-rebel raids, throwing stones at government forces to create a distraction and give the rebels a chance to flee.

"It is a direct confrontation now," said Kashmiri historian Sidiq Wahid. "Public anger and defiance has reached levels never seen in Kashmir before."​

The streets of the main city of Srinagar were deserted on Saturday, with all shops and businesses closed.

One senior police official, who wished to remain anonymous, said that authorities had not ordered an official curfew in the city, but had invoked a colonial-era law that bans assembly of more than four people and is often used to prevent rioting.

A security alert has been enforced across the Kashmir Valley, with some preventive arrests made ahead of Saturday's anniversary, police inspector general Muneer Ahmad Khan said.

"The alert is not only for unlawful assembly of people and rallies but also for militant strikes," he said. 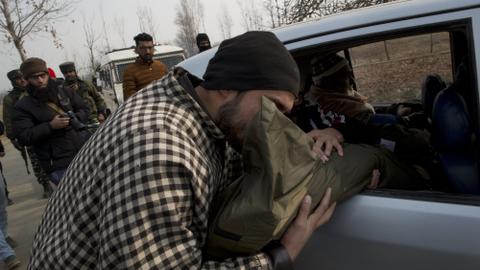 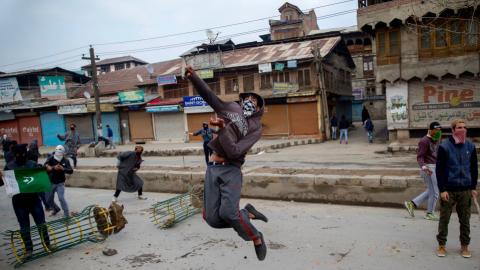