Seven of the eight, who are accused of sexually assaulting and murdering an eight-year-old girl in the city of Kathua have appeared before the Pathankot court.

The trial of seven men accused of raping and murdering an eight-year-old Muslim girl, in a case that has sparked national outrage in India, started in the Punjab city of Pathankot.

An eighth accused is a juvenile and was not brought for the hearing as he is facing trial in a juvenile court in northern Kathua city.

Of the eight accused, one is a retired local government official and two are police officers.

After the hearing, the court asked the prosecution to produce translated copies of the charge sheet from Urdu to English in the next four days, said defence lawyer, Ankur Sharma. The proceeding will restart at noon on Friday (June 1).

The girl, from a nomadic community that roams the forests of Kashmir, was drugged, held captive in a temple and sexually assaulted for a week before being strangled and battered to death with a stone in January.

The national outrage over the incident has drawn parallels with the massive protests that followed the gang rape and murder of a girl on a Delhi bus in 2012.

India introduced the death penalty for rapists of girls below the age of 12 last month in response to the outrage over the gang rape of the girl in Kathua.

The law does not apply retrospectively.

The Kathua case reignited memories of the similarly brutal gang rape of a woman on a Delhi bus in 2012 who later died of her injuries. 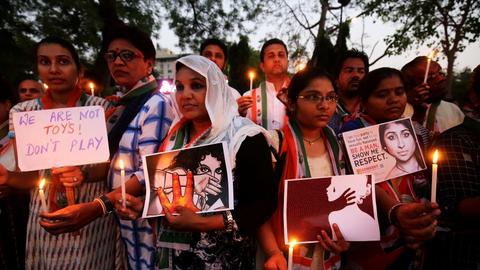