Seventy years after the Korean War began, prospects for a peace treaty to officially end the conflict appear as distant as ever, as the two Koreas held low-key commemorations amid heightened tension on the peninsula.

North and South Korea on Thursday separately marked the 70th anniversary of the start of the Korean War with largely subdued commemorations amid the coronavirus pandemic and heightened tension on the peninsula, a day after the North abruptly halted a pressure campaign against the South.

Turkey was among first countries to answer UN's call for military aid to South Korea after North attacked in 1950.

“On this historic day that we commemorate the 70th anniversary of the Korean War,” Turkish President Recep Tayyip Erdogan said in a video sent to a ceremony held in South Korea, “I remember our hallowed martyrs with grace and our veterans with gratitude.”

Erdogan said he felt very pleased by the ties of friendship between the two countries, stemming from the unique solidarity shown during the Korean War and which have been gaining strength since.

“We are determined to carry our relations, which we increased to the level of strategic partnership in 2012, a step further in the coming period,” he added.

South Korea issued a joint statement with the United States, which fought alongside it during the 1950-53 war triggered by a surprise North Korean invasion. The US still stations about 28,500 soldiers in South Korea in what North Korea views as a military threat.

In the statement, South Korean Defense Minister Jeong Kyeong-doo and US Defense Secretary Mark T Esper said they “commit to strengthening and adapting the alliance to meet present and future challenges” and urged North Korea to implement past disarmament pledges.

Jeong and other South Korean military leaders later paid their respects at a national cemetery in Seoul, where about 130,000 war-related dead, mostly South Korean soldiers, are buried or honoured.

They were given special permission to enter Seoul National Cemetery, which has imposed entry restrictions amid a resurgence of the coronavirus in recent weeks. The cemetery received about 530,000 visitors in June last year but only about 61,000 this month, according to cemetery officials.

A war museum in Seoul, normally a popular place to visit on the war's anniversary or on Memorial Day on June 6, remained shut on Thursday.

In the evening, South Korea held a ceremony with 300 war veterans, bereaved relatives and government officials at a military airport near Seoul. It was far less than the 4,000 people who attended last year, according to the Ministry of Patriots and Veterans Affairs.

During the ceremony, President Moon Jae-in said he hopes North Korea will “boldly embark on an endeavour to end the most sorrowful war in world history.” He said the two Koreas must achieve peace first before being able to see the path to reunification.

North Korea marked the anniversary with visits to monuments to late soldiers and with anti-US rhetoric and newspaper editorials praising its fighting in “the Fatherland Liberation War.”

An institute run by the North's Foreign Ministry said in a statement that "we will continue to build up our strength to overwhelm the persistent nuclear threats that the US has launched at us.”

The main newspaper, Rodong Sinmun, said in an editorial that, “The spirit of defending the country in the 1950s which brought about a victory after defeating the aggressors is a valuable mental heritage to be glorified forever, generation after generation."

Seoul’s Unification Ministry, which handles relations with North Korea, said there were no signs that North Korea had organised mass public events commemorating the anniversary.

Two years ago, a flurry of diplomacy and summits between North Korean leader Kim Jong-un and the presidents of the United States, South Korea, and China raised hopes that even if the North's nuclear arsenal was undiminished, the parties might agree to officially end the war.

Those hopes have been dashed, however, with North Korea accusing the United States and South Korea of clinging to hostile policies, and Washington pressing Pyongyang to abandon its growing arsenal of nuclear weapons and long-range missiles.

A series of follow-up meetings and working-level talks failed to close the gap between the two old enemies, and North Korea has taken an increasingly confrontational tone, resuming short-range missile launches, blowing up an inter-Korean liaison office and severing communication hotlines with South Korea.

On Wednesday, North Korea said it had decided to suspend plans for unspecified military action against South Korea, but warned it to "think and behave wisely."

Historians have estimated the war may have caused as many as one million military deaths and killed several million civilians. Thousands of families were divided with little contact as the heavily fortified Demilitarized Zone (DMZ) cut the peninsula in two. 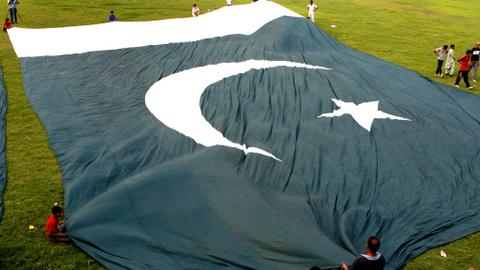