Malaysia doesn't believe in confrontation, Prime Minister Mahathir Mohamad says as he hopes to expand trade with China in a meeting with his Chinese counterpart Li Keqiang in Beijing.

Malaysian Prime Minister Mahathir Mohamad said on Monday he believed China would sympathise with his country's "internal fiscal problems" as he seeks to renegotiate, or potentially cancel, more than $20 billion in Chinese-funded projects.

Mahathir said after meeting Chinese Premier Li Keqiang in Beijing he did not believe in confrontation with any country and stressed the benefits Malaysia stood to gain from increased exposure to Chinese trade, technology and entrepreneurship.

"We hope also to get China to understand the problems being faced by Malaysia today," Mahathir told a joint news conference with Li.

"And I believe that China will look sympathetically towards the problems that we have to resolve and perhaps helping us to resolve some of our internal fiscal problems," he said.

Mahathir did not mention the projects in question, but he vowed repeatedly before his China visit to discuss the "unfair" Chinese infrastructure deals authorised by former premier Najib Razak.

Najib courted Chinese investment and was a cheerleader for President Xi Jinping's signature Belt and Road Initiative in Southeast Asia during his decade-long rule, but Mahathir has questioned the value of the deals and the risk that they would leave Malaysia "indebted" to Beijing.

Li said China hoped that a further expansion in trade ties with Malaysia would result in greater balance in two-way trade and that China was ready to increase "to a fairly large extent" imports of palm oil and other agricultural produce to meet the needs of Chinese consumers. China is Malaysia's third-largest export market after India and the European Union.

He said consensus reached during talks and a raft of memorandum of understandings signed during Mahathir's visit, including on a bilateral currency swap, palm oil, rubber and durian imports, sent a message that the two countries would "remain friendly to each other in the long term."

However Mahathir, who turned 93 last month, offered only a qualified endorsement when Li, addressing him directly, asked whether he believed they had consensus on upholding free trade.

"We do not want a situation where there is a new version of colonialism happening because poor countries are unable to compete with rich countries," he said.

The centrepiece of China's Belt and Road infrastructure push in Malaysia is the ambitious $20-billion East Coast Rail Link project, on which work has been suspended pending discussions over pricing.

Mahathir has also halted work on two projects worth more than $2.3 billion awarded to the China Petroleum Pipeline Bureau that have been linked to graft at Malaysian state fund 1MDB. 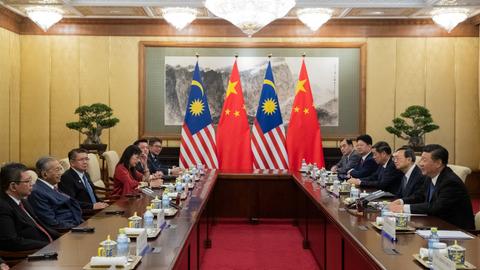