Malaysian Prime Minister seeks resounding victory in May 7 Borneo state polls to show that Malaysians still trust him after a financial scandal that rocked the country.

Malaysian Prime Minister Najib Razak does his utmost efforts to secure a resounding victory in Sarawak in the country's state polls to be held on Saturday, seeking to show that Malaysians still trust him despite 1MDB financial scandal that rocked the country.

On the campaign trail in Borneo, Najib has made big money pledges and taken his entourage to remote villages as he canvasses support.

"This is a good example of our continued high commitment to Sarawak," he told a media conference in Kuching, after holding a cabinet meeting in the state's capital and approving 3.5 billion ringgit ($878 million) in projects and investment for the state.

Politicians and analysts suggest that the governing Barisan Nasional (BN) coalition will comfortably win the elections.

Najib has faced sustained pressure to resign over allegations of graft and billions of dollars in misappropriated funds at his pet project 1Malaysia Development Berhad (1MDB).

He has dismissed the allegations maintaining that he has not used the funds for personal gain.

On January 26, an investigation cleared him of charges revealing that the 681 million dollars found in Razak's private bank account was a gift from the Saudi royal family.

Malaysia's finance ministry said on Wednesday it would dissolve the board of advisers at 1MDB and take over its remaining assets. 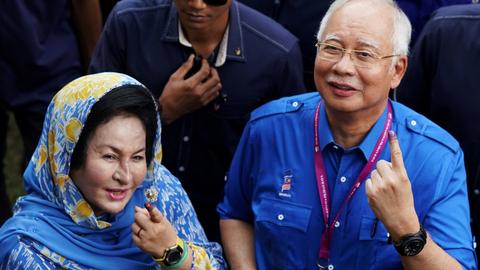