No damages or casualties have been reported because the epicentre of the earthquake was far away from the mainland.

A powerful earthquake of magnitude 7.8 off east Russia's Kamchatka Peninsula triggered a tsunami warning, but the threat has now passed, the US Geological Survey and US Pacific Tsunami Center said.

The quake struck at 2334 GMT some 200 kilometres from the city of Nikolskoye on Bering island off the Kamchatka Peninsula.

The epicentre was west of Attu, the westernmost and largest island in the Near Islands group of Alaska's remote Aleutian Islands.

The earthquake was very shallow, only 10 kilometres below the seabed, which would have amplified its effect, but it was far from any mainland, and there were no immediate reports of any casualties or damage.

The Kamchatka branch of Russia's emergency situations ministry had warned that waves up to 50 centimetres high could reach Nikolskoye.

The US Pacific Tsunami Warning Center had warned earlier that "hazardous tsunami waves were possible for coasts within 300 km of the earthquake epicentre."

But it later said that based on all available data the tsunami threat from this earthquake had passed.

The quake was initially reported as a magnitude 7.7 before being revised down to 7.4 and finally upgraded to 7.8, a major quake normally capable of causing widespread and heavy damage when striking on or near land.

The quake was followed by numerous aftershocks, including several above magnitude 5.0. 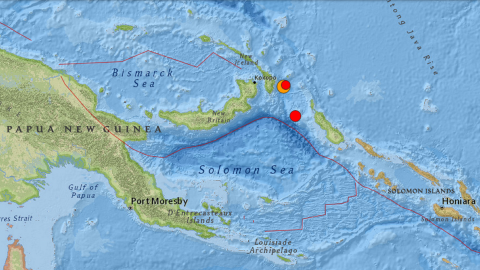 Magnitude 7.9 earthquake strikes off the coast of Papua New Guinea