Torrential rains continue to claim lives in South Asia. At least 33 people died in Nepal while four children were killed in Pakistan. More than 1.2 million people in northeast India have been hit by floods.

At least 33 people have been killed by landslides across Nepal. The death toll is expected to rise as many are still missing; according to The Kathmandu Post, 39 people have died in the country.

Heavy monsoon rains have swelled rivers across Nepal, triggering floods and landslides that have destroyed homes.

"Since Monday, 33 people have died and another 23 people are missing because of floods and landslides in several districts," home ministry deputy spokesman Jhanka Nath Dhakal told AFP.

"We are on high alert and our teams are working overnight in search and rescue operations," Dhakal said.

According to police reports, torrential overnight rains led to the landslides that left families in the districts of Gorkha and Pyuthan buried under rock and mud on Tuesday.

In the hilly district of Pyuthan, at least eight people from two different families were killed after their houses, in two separate villages, were buried by the debris, said Ranjit Singh Rathod, Pyuthan district police chief.

The victims included a couple and their three daughters all aged under 10 in Rajwara village. A family of three, including a seven-year-old girl, died in the nearby settlement of Puja.

"The bodies have been recovered (after) a rescue operation was carried out jointly by police and locals," Rathod told AFP.

Another three people lost their lives in Gorkha district when a landslide slammed into a trail used by villagers on Tuesday morning, local police chief Birendra Thapa said.

"Two women who were 45 and 30 years old and a 15-year-old boy were confirmed dead... Three others have been taken to hospital for treatment," Thapa said.

"The landslide was caused by heavy rainfall the day before," he said.

Heavy rains last week caused parts of a school to collapse in the capital of Nepal, Kathmandu, killing two students and injuring 24 others.

The week of rains also affected other regional countries.

Heavy rain and landslides in Pakistan claimed four lives on Wednesday, said the Provincial Disaster Management Authority of the province of Khyber-Pakhtunkhwa.

At least two children died in the district of Abbottabad and six people were injured after two buildings collapsed due to rain.

Another two children drowned in a flood in the district of Upper Dir. A third child was rescued, but said to be in critical condition.

In India, an alert has been issued in East Champaran, West Champaran, Muzaffarpur and Vaishali districts of Bihar following heavy rain in catchment areas of Nepal.

At least three members of a family in the district of Darjeeling died last week in a landslide.

More than 1.2 million people in northeast India have been hit by floods which have submerged hundreds of villages, inundated large swathes of farmland and damaged roads, bridges and telecommunications services, local authorities said on Tuesday.

Scores of people die every year from rain-triggered disasters - including floods and landslides - during the monsoon season in the Himalayan region. 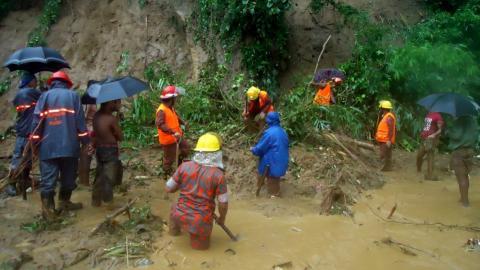