Nepal, India on alarm over child trafficking to UK

Nepal and India expressed alarm on Tuesday over a report that children as young as 10 from both countries are being sold as domestic slaves to rich families in the UK for $7,525 ( 500,000 rupees) each.

An investigation by The Sun newspaper suggested that gangs operating in the north Indian state of Punjab are preying on destitute Indian children, as well as Nepali children who migrated to India after earthquakes hit their country last year.

The article published on Monday prompted British Home Secretary Theresa May to call for a police investigation into the allegations of child trafficking - "a truly abhorrent crime" - and action against perpetrators.

Government officials in Nepal and India said they are aware human trafficking is common, especially after natural disasters, but were surprised victims are being sent as far away as the UK.

"We have already instructed police to investigate this. This is very serious," Yadav Koirala, spokesman for Nepal's Home Ministry, said.

"We have no proof now. If any proof is found out during investigation, we will bring those involved it the crime to justice. There is no question of leaving them without punishment."

An official from India's home ministry said the government was trying to tackle the "menace" of human trafficking "with all seriousness."

"It is a known fact that children from poor families are trafficked from states such as Bihar and Uttar Pradesh bordering Nepal. The last devastating earthquake in Nepal has added to this problem," said the official, who did not want to be named.

He said cases of human trafficking were possible in Punjab where drug trafficking is a problem, and that the same gangs could be involved in buying and selling children as well.

'Take a Nepalese To England'

The Sun's investigation was carried out by an undercover reporter posing as a wealthy British-Indian visiting the city of Jalandhar, looking for a child worker to take back to the UK.

It quotes a trader called Makkhan Singh, who had lined up three children for the reporter to choose from, claiming he had supplied mostly Nepali boys to rich families in England.

"Take a Nepalese to England. They are good people. They are good at doing all the housework and they're very good cooks. No one is going to come after you," he was quoted as saying.

"India is flooded with boys. Nepal has been destroyed and all the Nepalese are here. We go to the poor parents, we talk to them, we do a deal," he added.

South Asia is the fastest-growing and second-largest region for human trafficking in the world, after East Asia, according to the United Nations Office for Drugs and Crime (UNODC).

India, alone, is home to almost half the world's 36 million slaves, according to the 2015 Global Slavery Index, produced by the Australia-based Walk Free Foundation.

Thousands of children, mostly from poor rural areas, are taken to cities every year by gangs who sell them into bonded labour or hire them out to unscrupulous employers.

Many end up as domestic workers or labourers in brick kilns, roadside restaurants or small textile and embroidery workshops. Many women and girls are sold into brothels.

Experts say the risks of being exploited are even greater after disasters when homes, jobs and livelihoods are lost.

Earthquakes that struck Nepal in April and May 2015, killed some 8,800 people, left hundreds of thousands of families homeless and raised concerns among rights groups that trafficking rings would take advantage of the vulnerable.

Nepali officials say more than 40,000 children either lost their parents, were injured, or were placed in a precarious situation following the disaster.

Over the last year, Nepali officials say they had intercepted 400 children moving in groups without their parents.

In India, officials in Uttar Pradesh state say they have rescued more than 160 Nepalis, mainly women and children, from human trafficking after the twin quakes.

Back in Britain, Home Secretary May called on The Sun to help with the police investigation in the UK.

"We encourage The Sun to share its disturbing findings with the Police and National Crime Agency so that appropriate action can be taken against the vile criminals who profit from this trade," May said in a statement on Monday. 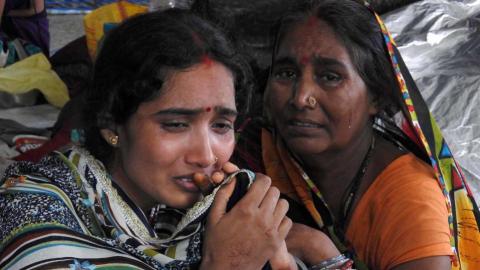