The protest comes after the Hong Kong government refused to meet demonstrators' demands, including the complete withdrawal of the extradition legislation and resignation of Chief Executive Carrie Lam.

Hundreds of protesters poured into Hong Kong's main government complex early on Friday to demand the resignation of its pro-Beijing leader over a controversial extradition proposal that has sparked the city's biggest political crisis in decades.

The protest comes after the government refused to meet the demands of demonstrators, who have marched in their millions this month to oppose a bill that would have enabled extraditions to the Chinese mainland — and the movement has transformed into a larger rebuke of the administration of Chief Executive Carrie Lam.

Opposition groups had called for the complete withdrawal of the legislation and for Lam to step down.

Protesters, who have been largely leaderless during the anti-government rallies, were asked to "hold picnics" outside the legislature.

Organisers have also called for a go-slow protest on roads and public transport, and urged people to gather in other parts of the city to show their support.

Some at the government complex brought placards asking the police not to shoot at them, in a reference to sporadic violence last week between security officials and protesters.

In addition to ousting Lam and cancelling the extradition bill, protesters also want the release of those detained during those clashes, and an investigation into allegations of police brutality.

"The government still hasn't responded to our demands, After so many days... they are all talking rubbish and shifting the blame on one another," protester Poyee Chan, 28, told AFP.

"So I feel we need to come out and tell them: we citizens won't accept such fake responses."

The call for Friday's protest was made by the city's student unions, as well as informal organisers over social media and messaging apps like Telegram.

"There are many ways to participate. Think carefully about your own ways to show your love to Hong Kong. June 21 is not the end of the fight, there will be more in the coming days."

The groups had also recommended a mass strike, but it was not immediately clear which business or professional groups would support such a call.

Lam has so far defied calls to step down, and while she has suspended the bill indefinitely, it has failed to quell anger.

Administrative offices at the complex were closed on Friday "due to security considerations".

Opponents of the extradition bill fear it will ensnare the people of Hong Kong in mainland China's opaque and politicised justice system, and also give Beijing a tool to target its critics based in the semi-autonomous territory. 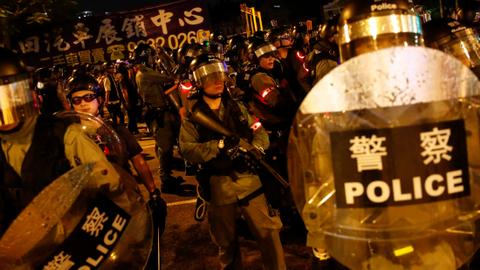