New Zealand Prime Minister Jacinda Ardern on Saturday said that the country's gun laws would change in light of the attack on two mosques in Christchurch.

Ardern said the gunman, a 28-year-old Australian, obtained a "Category A" gun licence in November 2017 and began purchasing the five weapons used in Friday's attacks in the southern city of Christchurch the following month.

"The mere fact... that this individual had acquired a gun licence and acquired weapons of that range, then obviously I think people will be seeking change, and I'm committing to that," she said.

"While work is being done as to the chain of events that led to both the holding of this gun licence and the possession of these weapons, I can tell you one thing right now - our gun laws will change."

The terrorist attack killed 50 people and at least 48 people, including children, were under treatment in Christchurch Hospital after the shootings, New Zealand health authorities said.

One man was arrested and charged with murder, and two other armed suspects were taken into custody while police tried to determine what role, if any, they played in the cold-blooded attack that stunned New Zealand.

Prime Minister Ardern said the suspect in the Christchurch shooting travelled around the world and was not a long-term resident in the country.

Ardern told a news conference in the capital Wellington that the man was an Australian citizen "who travelled sporadically to New Zealand and stayed for varied amount of time."

"I would not describe him as a long-term resident," she said.

She said he was, however, not on the watch list in New Zealand or Australia.

The gunman shot dead 50 people and wounded more than 40 at two New Zealand mosques on Friday.

Ardern said following the incident, the country's gun laws will have to change. She added that nationalities affected by the attack include Pakistan, Turkey, Saudi Arabia, Indonesia and Malaysia. 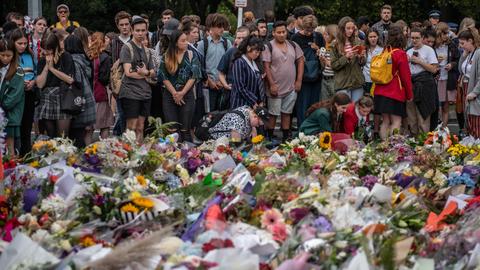