North Korea will hold a rare ruling party congress in January where leader Kim Jong-un will announce a new five-year plan to develop the country's dismal economy ravaged by US-led sanctions and the coronavirus pandemic.

State media said on Thursday the plans were confirmed during a plenary meeting of the Workers' Party's decision-making Central Committee where Kim acknowledged economic shortcomings caused by "unexpected and inevitable challenges in various aspects and the situation in the region surrounding the Korean Peninsula."

The Workers' Party last convened for a full congress in 2016, which was its first in 36 years, where Kim announced his initial five-year national development plan, which included goals for improving power supply and increasing agricultural and manufacturing production.

Kim in December had declared a "frontal breakthrough" against sanctions while urging his nation to stay resilient in the struggle for economic self-reliance.

But experts say the Covid-19 crisis has clearly derailed some of Kim's major economic goals after North Korea imposed a lockdown that significantly reduced trade with China — its major ally and economic lifeline — and likely hampered its ability to mobilise its workforce.

The party's meeting said the North's economy has "not improved in the face of the sustaining severe internal and external situations and unexpected manifold challenges" and that development goals have been "seriously delayed and the people’s living standard (has) not been improved remarkably."

The party’s congress in January will "set forth a correct line of struggle and strategic and tactical policies" after reviewing the experience of the last five years, it said in a statement published on KCNA.

It's also possible Kim could use the party congress, which would take place after the US presidential election in November, to announce a new foreign policy approach toward the United States and rival South Korea.

During the 2016 congress, Kim declared that his country will not use its nuclear weapons first unless its sovereignty is invaded and proposed talks with the South.

Seoul had employed a hard line on the North before the 2017 inauguration of President Moon Jae-in, a dovish liberal who met Kim three times in 2018 before bilateral relations cooled amid the stalemate in nuclear negotiations between Washington and Pyongyang.

Kim’s economic setbacks have left him with nothing to show for his high-stakes summitry with President Donald Trump, whom he first met in June 2018 in Singapore, where they issued an aspirational statement on a nuclear-free Korean Peninsula without describing when and how it would occur.

Their diplomacy deteriorated last year in Vietnam, after their second meeting when the Americans rejected North Korea's demands for major sanctions relief in exchange for a partial surrender of its nuclear capabilities.

The North has recently said it has no immediate intent to resume talks with Washington, vowing not to gift Trump with meetings he could boast as foreign policy achievements unless it gets something substantial in return.

Some experts say the North would likely avoid serious negotiations with the United States before the election as it wouldn’t want to make any major concessions when there’s a chance US leadership could change. 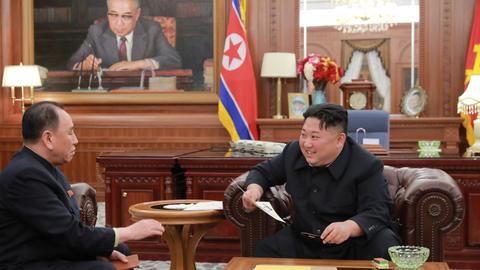