Pakistan's new Prime Minister Imran Khan called on Sunday for the rich to start paying taxes and said the country will begin an austerity drive to reduce debt, a campaign he will kick-start by selling his office's fleet of bullet-proof cars.

In his first address to the nation as premier, Khan set out his vision for a "New Pakistan" and spoke at length about the need to reshape the country by introducing an Islamic welfare system, reducing poverty and slashing high debt levels.

"We have formed a bad habit of living on loans and aid from other countries," said Khan, speaking under a portrait of his hero and Pakistan founder Muhammad Ali Jinnah

"No country can prosper like this. A country must stand on its own feet."

Khan, 65, a former cricket legend, was sworn in as prime minister on Saturday after his party swept to power in last month's election.

A firebrand populist, Khan's appeal has soared in recent years on the back of his anti-corruption drive, which has resonated with young voters and the expanding middle class in the mainly-Muslim nation of 208 million people.

But Khan has inherited a host of problems at home and abroad, including a brewing currency crisis and fraying relations with Pakistan's historic ally, the United States.

Khan did not shed any light on policy plans to deal with the currency woes that analysts expect will force Pakistan to seek another International Monetary Fund (IMF) bailout. Instead, Khan focused on debt and said former central bank governor Ishrat Husain would lead a task-force to drive austerity.

Criticising what he called the colonial-era mindset and lavish lifestyles of Pakistan's ruling elite, Khan announced he would live in a small three-bedroom house instead of the palatial prime minister's residence.

'I will save your money'

Khan plans to have only two servants instead of 524 reserved for a sitting premier. He also announced plans to sell a fleet of bullet-proof vehicles to help Treasury shortfalls, a bold move in a country where Islamist militants still pose a threat.

"I want to tell my people, I will live a simple life, I will save your money," he said.

Khan appealed to overseas Pakistanis to invest in the country and urged the wealthy to start paying taxes, a perennial problem in a nation famous for tax dodging and where less than one percent of the population files income tax.

"It is your responsibility to pay taxes," said Khan. "Think of this as a jihad [holy war], that you need to pay tax for the betterment of your country."

Khan said Pakistan was in grave danger from the effects of climate change and promised to reduce some of the world's highest maternal death rates and infant mortality rates.

He also spoke passionately about the need to help 22.8 million out-of-school Pakistani children in a nation where the literacy rate hovers above 40 percent.

Khan, who has never held a government position, named his 21-person cabinet over the weekend, opting mostly for experienced politicians.

Opponents criticised the choices, saying about half of the cabinet had served under the former military dictator Pervez Musharraf and were part of the old guard.

On Sunday, Khan announced he will oversee the interior ministry.

Khan said he wants Pakistan to build a welfare state akin to some found in the West, which he said are modelled on the ideas first voiced by the Prophet Muhammad in the holy city of Medina.

"I will spend money on those who God has not given enough to," he said. 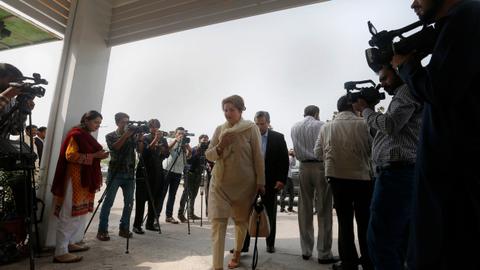 Pakistani lawmakers vote for next president 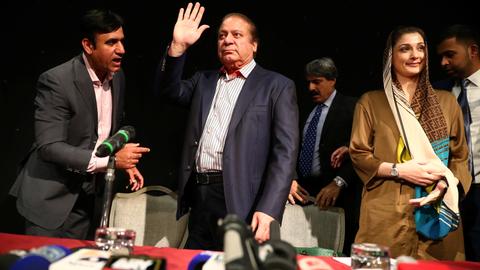