Daesh-linked Maute militants targeted the civilians in the mainly-Muslim city of Marawi on Mindanao island raising the death toll to 85 since the fighting began five days ago, military officials say.

Daesh-linked militants locked in street-to-street battles with troops in a southern Philippine city have killed 19 civilians, the military said on Sunday, bringing the official death toll from nearly a week of fighting to at least 85.

Authorities said the civilians were killed in Marawi, a mostly Muslim-populated city of 200,000 people.

"These are civilians, women. These terrorists are anti-people. We found their bodies while conducting rescue operations (on Saturday)," regional military spokesman Lieutenant Colonel Jo-ar Herrera said.

The violence began on Tuesday (May 23) when dozens of militants went on a rampage throughout Marawi after security forces attempted to arrest Isnilon Hapilon, a leader of the Abu Sayyaf kidnap-for-ransom gang.

Hapilon is also believed to be Philippine head of Daesh and the military is certain that the Maute are protecting him.

​The little-known Maute group has staged similar, days-long sieges on Mindanao island but none on the scale of Marawi, where a martial law has been imposed since Tuesday.

Thirteen soldiers, two policemen and 51 militants have died in the fighting, according to authorities since Tuesday.

Most of the city's residents have fled because of the fighting, which has seen the military heavily bomb residential areas where the militants were believed to be hiding.

The military announced on Saturday, the start of the Holy month of Ramadan, that it would intensify the bombing campaign against Maute believed to number around 260.

"In as much as we would like to avoid collateral damage, these rebels are forcing the hand of government by hiding and holding out inside private homes, government buildings and other facilities," military spokesman Brigadier-General Restituto Padilla said.​

Human Rights Watch (HRW) has slammed Philippines President Rodrigo Duterte for his "pro-rape" comments after the president said that he will claim responsibility if his soldiers were to rape three women under the current martial law.

"Duterte's pro-rape comments only confirm some of the worst fears of human rights activists that the Duterte government will not just turn a blind eye to possible military abuses in Mindanao, but may actively encourage them," said Phelim Kine, deputy director with the Asian division of HRW.

On Saturday Duterte said that he will ignore the Supreme Court and congress as he enforces martial law across the southern third of the country, despite the constitution giving them oversight.

"Until the police and the armed forces say the Philippines is safe, this martial law will continue. I will not listen to others," he said. 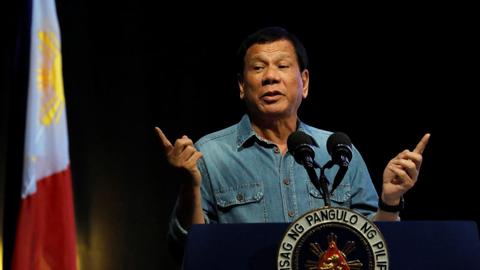