Duterte's crackdown started the day he took office on June 30 last year. During his election campaign he vowed to wipe out crime and drugs.

Philippine police have killed at least 60 people in dozens of anti-drugs operations in a province north of the capital, Manila.

“We have conducted ‘one-time, big-time’ operations in the past, so far, the number of casualties and deaths, this is the highest,” Caramat told a news conference.

He defended the police action and said the deaths were during shootouts, and were not executions, as activists have often alleged.

Ten other gunfights ensued when police tried to serve arrest warrants to suspects who fought back.

He said 93 of those held were wanted for other crimes, as well as drugs offences.

“There were 32 killed in Bulacan in a massive raid, that’s good,” Duterte said in a speech.

“Let’s kill another 32 every day. Maybe we can reduce what ails this country.”

Thousands of people have been killed in the anti-drugs campaign, Duterte’s signature policy, since it was launched on June 30 last year.

Most of those killed have been drug users and small-time dealers from poor neighborhoods.

The intensity of the crackdown has alarmed the international community, activists and human rights groups.

They have accused the police of executing suspects and planting drugs and guns at crime scenes.

But police and the government officials reject the accusations.

Political opponents of Duterte have filed a complaint with the International Criminal Court (ICC) accusing the president and top aides of crimes against humanity.

Duterte has welcomed the ICC complaint, and said he was willing to rot in jail to protect Filipinos.

He has often complained about human rights groups criticising and undermining his campaign.  On Wednesday said he would instead investigate them, or worse.

“If they are obstructing justice, shoot them,” he said. 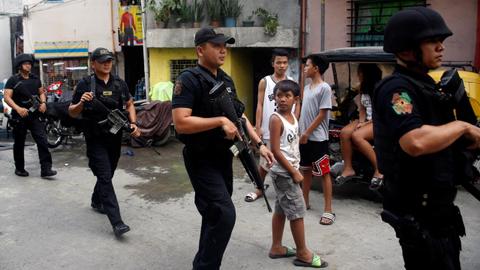