"Due process has nothing to do with my mouth (statements). There are no proceedings here, no lawyers," he said before reading his list on Sunday.

Hundreds of suspected drug dealers have been killed by police or vigilantes since Duterte won the election in May.

He said the list has been validated by the police and the military. He also pointed out that it is his duty to inform people about the country's "narco-politics."

"I ordered the validation. I am the one reading it and I am the sole person responsible for this one," Duterte said.

Among the officials Duterte listed, were nine judges, congressmen, mayors and police or military officers.

The president said the names mentioned have been relieved of their duty and could face criminal charges. He also cancelled their firearms permits.

"If you show the slightest violence in the resistance, I will tell the police, 'Shoot them'," he told reporters and soldiers during his speech in the southern city of Davao.

He ordered the police officers to report to Philippine National Police (PNP) chief Director General Ronald de la Rosa while the judges involved should report to the Supreme Court.

"All policemen, PNP personnel assigned as security guards, security personnel of mayors I have mentioned, you are hereby relieved of your duty and immediately report to your mother unit," Duterte said.

"The president is encouraging all of the persons of interest, the alleged drug lords and drug coddlers to come out in the open, to surrender themselves and submit themselves to thorough investigation," Duterte's spokesman Martin Andanar later told reporters.

A day after the 24-hour deadline, 27 mayors and 31 police officers, including a colonel, mentioned in Duterte's list, surrendered in order to clear their name from aleged involvement in the illegal drug business.

During his election campaign, Duterte vowed to wage a war against drug dealing and other crimes urging police to kill those who resist.

Duterte told human right groups not to intervene with the government's campaign by turning against policemen or soldiers as they have his "official and personal guarantee" of immunity in case of prosecution.

"I would like to say now—they will never go to prison—not under my watch," he said.

"I don't care about human rights, believe me."

The UN anti-drugs office released a statement on Wednesday opposing the killings.

"The United Nations Office on Drugs and Crime (UNODC) remains greatly concerned by the reports of extrajudicial killing of suspected drug dealers and users in the Philippines," the statement read. 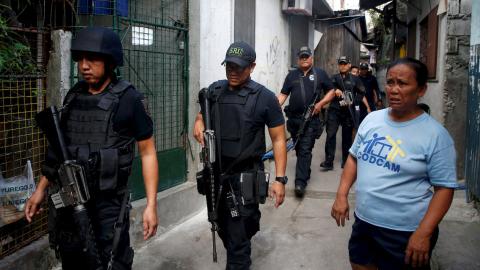