A vast majority of the Philippines supports the controversial leader whose brutal war on drugs and shocking statements draw criticism from other countries and rights groups.

He has encouraged vigilante killings and joked about rape, yet Friday marks a comfortable first year in office for Philippine President Rodrigo Duterte.

Duterte's war on drugs, foreign policy shifts, and controversial – and often offensive – statements have placed the Philippines in the international spotlight, drawing criticisms on various fronts.

"We found lots of accounts that would give us sufficient grounds to investigate because there have been a lot of stories of abuse committed by state agents and stories of alleged resistance that turned out to be not true after all," Jacqueline Ann De Guia, the spokeswoman for the independent Philippines-based Commission on Human Rights, said.

But a vast majority still regard him as a beacon of change and sometimes go to great lengths to idolise the leader. Even though over 9,000 people have been killed since July 2016 in his war against drugs.

Both police operations and unexplained killings by suspected "vigilantes" have caused an unending bloodbath on the streets of the Philippines.

A former mayor of Davao City, Duterte was the first president from the southern parts of the Philippines.

The same region has seen a Muslim separatist insurgency since the late 1960s. The southern Philippines is also where Daesh-inspired militant groups have been battling troops after a botched raid against a man considered the southeastern emir of Daesh.

Duterte has claimed to bring to an end all insurgencies in the Philippines, including the violent conflict with separatist rebels that has killed more than 120,000 people and displaced 2 million over the past 47 years.

An ongoing conflict with pro-Daesh militants in Marawi City prompted Duterte to declare martial law over Mindanao island in the south.

Duterte's administration has also seen growing relations with China despite issues between the two countries revolving around the South China Sea.

"The fundamental assumption is that China is too strong for us. And it would be in our best interest to get along with China rather than to confront China," Van Ybiernas, a historian, said. 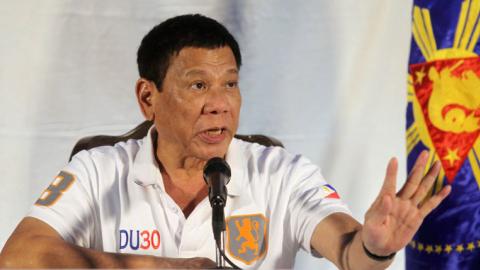