Three rebel fighters have been killed in a gun battle with Indian troops in the heart of the restive Kashmir's main city of Srinagar, two days after eight rebels were killed in another gunfight.

The rebels were killed in a firefight in the Zoonimar area of the densely populated old city of Srinagar, a police officer who asked to remain anonymous told AFP news agency on Sunday.

One home was destroyed during the clashes. The killings of rebels stoked fresh protests in the area, witnesses said.

This was a second such encounter in the old city and took the death toll of alleged rebel fighters to over 100 this year.

New Delhi has been stepping up counter-insurgency efforts in the disputed territory since the nationwide coronavirus lockdown was imposed in late March.

Just over a month ago, the son of a top resistance leader and his associate were killed in the city.

The May incident – a day-long firefight that saw 15 homes blown up by police and soldiers – was the first armed encounter between rebels and Indian troops in Srinagar in two years.

READ MORE: How India and Israel use the pandemic to expand settler-colonial projects

Rebel groups have fought for decades for the region's independence or its merger with Pakistan and enjoy broad popular support.

The fighting has left tens of thousands dead, mostly civilians, since 1989.

India has more than 500,000 troops stationed in Kashmir, a Himalayan territory also claimed by Pakistan.

A PhD scholars, who was martyred by the #IndianArmy in #Srinagar today. Hundreds of engineers, doctors and PhD scholars have been martyred in the struggle for independence from the Indian occupied forces. Basic human rights violations continue in Kashmir #IOJK pic.twitter.com/IGyaIbqFaA

A 13-year-old girl was killed in Pakistani-administered Kashmir on Sunday in an exchange of gunfire along the de facto border with the Indian-administered side of the region, according to the Pakistani military.

Amid heightened tensions between the South Asian nuclear rivals, the Pakistani army accused Indian border forces of targeting civilians on the Pakistani side of the disputed Kashmir valley, claiming that the girl's mother and a 12-year-old boy were also wounded due to "indiscriminate" fire.

In neighbouring India, the local police blamed Pakistani troops for initiating the fire, saying Pakistani mortar shelling wounded five civilians on their side of Kashmir.

Also on Sunday, the Organization of Islamic Cooperation (OIC) contact group on Kashmir said it will hold an emergency meeting via videoconference on Monday to discuss the latest situation in the disputed territory.

The online meet will bring together the foreign ministers of the member states: Turkey, Azerbaijan, Niger, Pakistan, and Saudi Arabia, the OIC said in a statement.

"The meeting is part of a series of continuous Jammu and Kashmir Contact Group meetings to address the issue," OIC Secretary-General Yousef Al Othaimeen said.

Kashmiris say India plans to enact a demographic change in the region by settling Hindu outsiders.

This is happening just outside my window. This is our life!
The situation keeps on getting worse due to the Mushrikeen of the hind and their apostate allies. But surely the journey is ours but the victory is Allah's #sringar #kashmir #encounter #KashmirBleeds pic.twitter.com/vdkJIS6YKu

Kashmir is also a source of tensions between China and Assam.

This week, a deadly brawl between Indian and Chinese soldiers caused the deaths of at least 20 Indian soldiers in the eastern Galwan Valley, an achingly beautiful landscape that is part of a border region that has been disputed for decades because of its strategic importance as the world’s highest landing ground.

Tensions have surged since August after India unilaterally declared the Ladakh region a federal territory while separating it from disputed Kashmir.

China is among a handful of countries that strongly condemned the move, raising it at international forums including the UN Security Council.

Indian officials have kept a near-total silence on issues related to the confrontation with China.

Timeline: the Line of Actual Control between China and India 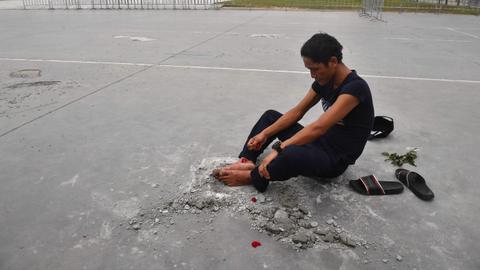