Indian government forces killed a top rebel commander and his aide in disputed Kashmir, then proceeding to shut down mobile internet services during subsequent anti-India protests.

Anti-India protests and clashes continued for a third day in India-administered Kashmir on Friday following the killing of a top rebel leader by government forces.

Rebel commander Riyaz Naikoo and his aide were killed in a gunfight with Indian troops on Wednesday in the southern Awantipora area, leading to massive clashes at several places.

The clashes continued on Friday as protesters threw stones at Indian government forces, who fired shotgun pellets and tear gas to quell the spiralling protests.

At least one man was killed and 50 others were injured in the three days of clashes, residents and medics said.

At least two dozen people with bullet and pellet injuries were taken to a hospital in Srinagar, the region’s main city for treatment, a doctor said on condition of anonymity, because medics have been barred from briefing news media. She said more than a dozen people had been hit by pellets in one or both eyes.

Residents said government forces swooped into the rebel leader’s native village on Thursday and accused them of vandalising a tent which villagers had set up for mourning his death, triggering large protests and clashes in the area.

Authorities did not hand over the bodies of the two slain rebels to their families under a new government policy designed to thwart large–scale funerals that have become a rallying point for anti-India protests. Instead, police buried the bodies in a mountainous graveyard about 100 kilometres from the village.

Authorities have shut down cellphone and mobile internet service since Wednesday, a common Indian tactic in the region aimed at silencing communications with the outside world. They also imposed a near-total information blackout and refused to brief media about the situation.

At that time, it launched a months-long total communication blackout and an unprecedented military crackdown in the strife-torn region.

Indian security officials and some members of the ruling Bharatiya Janata Party called Naikoo’s death a major victory against the insurgents. Naikoo, 35, was the chief of operations of the region’s largest indigenous rebel group, Hizbul Mujahideen.

For decades, rebels have fought an armed conflict against Indian rule in India-administered Kashmir, with the majority of them wanting independence for the Himalayan region, or to join Pakistan.

Kashmir is claimed in whole but ruled in part by both India and Pakistan.

Indian troops have intensified operations in the region despite UN calls for a "global ceasefire" during the coronavirus pandemic.

About 70,000 people have been killed in the uprising and the ensuing Indian military crackdown.

Most Kashmiris deeply resent India's autocratic rule and support the call for the territory be united, either under Pakistani rule or as an independent country. 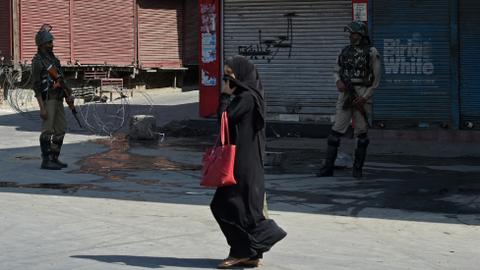