Sanctions against Myanmar remain an option as US evaluates Rohingya abuses

US delegation calls on Myanmar to return a secure and stable situation in Rakhine state where violence sent hundreds of thousands of Rohingya Muslim refugees across the border to Bangladesh.

The United States government will constantly monitor its sanctions regime to respond to violence in Myanmar's Rakhine state that has sent hundreds of thousands of Rohingya Muslim refugees across the border to Bangladesh, a senior US official said on Saturday.

"We are constantly evaluating the situation," Simon Henshaw, acting assistant secretary of State for the Bureau of Population, Refugees, and Migration, told reporters at a news briefing in Dhaka after visiting camps in Cox's Bazar where hundreds of thousands of Rohingya refugees are sheltering.

"Congress has given us a number of tools we can use," he said, noting disturbing reports of atrocities in Rakhine state.

"We call for a full investigation of these reports, we call for those who committed (the atrocities) to be held accountable," he said.

"It is incredible that only within two months more than 600,000 refugees have taken shelter in a country."

A seven-member delegation led by Henshaw visited Myanmar from October 29 before travelling to Bangladesh on Wednesday. It went to Cox's Bazar on Thursday.

The delegation also asked Myanmar to allow Rohingya people back to their land and to rehabilitate the villages that were burned. He said they had been shocked by Rohingya accounts of atrocities, murder and sexual assaults.

"The delegation called on the Myanmar government to allow access to press and international organisations so they could see the situation on the ground," he said.

US Department of State spokeswoman Heather Nauert said the issue has been taken to the highest level of authority in the US government.

"The statements related to the situation in Myanmar have been issued from the White House and also from the State Department."

She said the delegation would update US Secretary of State Rex Tillerson before his visit to Myanmar on November 15.

US lawmakers proposed targeted sanctions and travel restrictions on Myanmar military officials on Thursday over the treatment of the country’s Rohingya Muslim minority. This was one of the strongest efforts yet for Washington to intervene in the humanitarian crisis.

Introduced the day before Republican Donald Trump left on his first trip to Asia as president, the legislation would reimpose some sanctions lifted last year as Myanmar returned to democracy. It also would bar the United States from supplying most assistance to the country’s military until perpetrators of atrocities against the Rohingya are held accountable.

The measure does not target Burmese leader Aung San Suu Kyi, head of Myanmar’s civilian-led government and a Nobel peace laureate who still enjoys strong support among some U.S. officials.

Some 2,500 Rohingya refugees crossed into Bangladesh on Friday through two border crossings, a senior security official said on Saturday.

"Those refugees are already being sent to different camps under the supervision of Bangladesh Army," Major Mohammad Iqbal, Deputy Commanding Officer of Bangladesh Border Guard of Cox's Bazar district said. 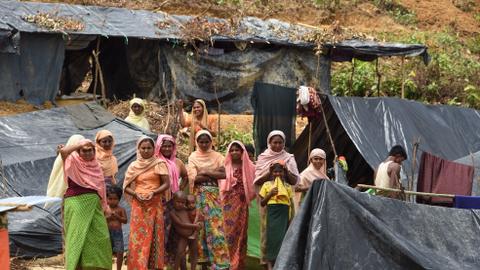