At least 12 people were killed and dozens wounded after a suicide bomb targeted a bus carrying Afghan army recruits near the eastern city of Jalalabad just hours after a similar attack hit a minibus carrying workers from Afghanistan's Ministry of Education and killed two of them in the capital on Monday.

"The suicide bomber was on a three-wheel motorcycle and targeted new army recruits who were heading to Kabul for training," said a police official on the condition of anonymity.

According to hospital chief, Ihsanullah Shinwari, twelve bodies and at least 38 wounded had been taken to the main hospital in Jalalabad after the suicide bomb hit the army recruits in the Sorkh Rud district of Nangarhar province, the principal city in eastern Afghanistan.

Ministry of Defence spokesman Dawlat Waziri confirmed the incident saying that "The recruits were being transferred from Jalalabad to Kabul," and also putting the number of injured at 26.

"It was a crowded area and it is hard to say now how many of them were from the defence ministry," he added.

"The education ministry asks security forces to bring perpetrators to justice as soon as possible," the ministry said in a statement.

There have been no claim of responsibility for the two attacks.

The attack came days after US Secretary of State John Kerry paid an unannounced visit to Kabul to underline his support to Afghanistan's government and call on Taliban militants insurgents to resurrect the peace talks.

Taliban have been waging a revolt against the government since being toppled from power in 2001, frequently target the military. 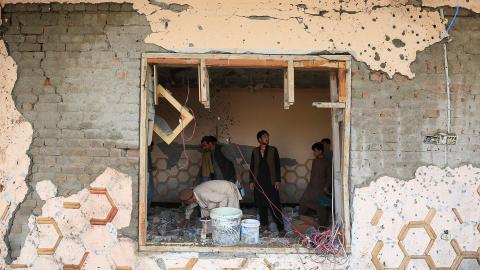