World Health Organization figures show the increase in new Covid-19 infections is now about 70,000 per day, up from about 50,000 just a few days ago. Here are the latest updates for March 30:

He added that in terms of personnel, medicines and supplies the country's health infrastructure is in very good condition.

He launched the campaign to collect donations from citizens for those in need, saying he was donating seven months of his salary to the cause and that the effort had already drawn $11 million.

Turkey has placed 41 residential areas under quarantine in order to contain the spread of the coronavirus, the president said.

Spain confirmed another 812 deaths in 24 hours from the coronavirus, bringing the total number of deaths to 7,340, according to Health Ministry figures.

The number of confirmed infections in Spain has now reached 85,195 cases. Around 12,298 health workers among patients including Spain's health emergency chief Fernando Simon.

With the latest figures, Spain became the third country to surpass China in infections after the United States and Italy.

In Switzerland, 295 people have died in the coronavirus outbreak, the country's public health bureau said, rising from 257 people on Sunday.

The death toll from coronavirus in Germany climbed up to 541, with 120 new deaths in the past 24 hours, according to the figures released by local health authorities.

The Berlin-based website Coronavirus-Monitor, which compiles up-to-date numbers from the local health authorities, has reported 6,996 new cases, bringing the total infections to 62,435.

More than 10,500 people are reported to have recovered from the virus.

Austria is banning the use of hotels for tourism as part of wide-ranging efforts to slow the spread of the coronavirus with Easter holidays approaching, Health Minister Rudolf Anschober said.

"A third point are hotels, with regard to the Easter holidays ... We want to stop the touristic use of hotels for this phase," Anschober told a government news conference.

Moscow imposed a lockdown in a bid to slow the spread of the coronavirus as Russian Prime Minister Mikhail Mishustin asked regional authorities to make similar preparations.

The Russian capital announced the strict new isolation measures after many Muscovites refused to heed official recommendations and self-isolate at the weekend and instead went to parks for barbecues.

The country has so far reported 1,534 cases of coronavirus and eight deaths, with more than one thousand infections in the capital.

Bolivia confirmed its first coronavirus-related death on Sunday, with confirmed cases rising to 96.

Health Minister Anibal Cruz announced that the patient was a 78-year-old female from eastern Santa Cruz.

Disclosing that the patient's death and organ failure was due to old age, the minister recommended Bolivians to take care of the elderly who are "more vulnerable and sensitive to this disease."

Thailand's public Health Ministry said on that two more people have died from the novel coronavirus, bringing the total number of deaths in the country to nine.

The two deaths included a 54-year-old Thai man in the southern province of Yala who had recently returned from Malaysia, and a 56-year-old Thai woman in Bangkok, said Anupong Sujariyakul, a senior official at the public Health Ministry's Department of Disease Control.

Death toll in India surges to 29

The coronavirus pandemic has claimed at least 29 lives in India, with confirmed cases rising to 1,071, authorities said.

According to latest figures by the Health Ministry, the state of Maharashtra, whose capital is the country's financial hub Mumbai, is the worst-affected region in the country with some 215 positive cases and eight deaths.

Australian Prime Minister Scott Morrison committed a A$130 billion ($79.86 billion) package to help save jobs as shockwaves from the coronavirus pandemic rip through the economy.

"Our goal is to protect the lives and livelihoods," Morrison said in a televised briefing from Canberra.

In a statement, the ministry said that while some of the cases originated from abroad, others were contacts of people who had been diagnosed with the virus.

A third person infected with the coronavirus has died in Taiwan, the government said, as the number of cases on the island approached 300.

According to previously announced data, the person was a man in his 40s who was infected while overseas and had returned to Taiwan having been on holiday in Austria and the Czech Republic.

Taiwan said on Sunday that its virus case total had risen to 298.

Argentina's President Alberto Fernandez said that the country would extend a mandatory nationwide quarantine period until the middle of April in a bid to slow the spread of the virus.

The quarantine, which restricts non-essential workers from leaving their homes apart from to buy groceries or medicines, has seen the South American country's streets virtually emptied, while its major grains industry has faced some disruption.

Vietnam's prime minister has asked major cities to prepare for possible lockdowns to stop the spread of the coronavirus as the number of confirmed cases in the Southeast Asian country almost reached 200, a government statement said.

"Hanoi and Ho Chi Minh City have to review and update plans to battle the virus, and have to stand ready for city lockdown scenarios," Prime Minister Nguyen Xuan Phuc said in the statement.

The death toll rose to 158, from 152 a day earlier, while 195 people recovered from the virus, according to the KCDC.

Mexico's Health Ministry on Sunday confirmed 145 new coronavirus cases and four new deaths in the last 24 hours, for a total of 993 cases and 20 deaths.

The commission said in a statement on Monday that four new deaths were reported, putting the cumulative death toll from the coronavirus outbreak in the mainland at 3,304 at the end on March 29. The total number of infections to date rose to 81,470.

New York state surpassed a grim milestone on Sunday as its death toll from the coronavirus outbreak climbed above 1,000, less than a month after the disease was first detected in the state.

New York City reported in the evening that its toll had risen to 776. The total number of statewide deaths isn't expected to be released until Monday, but with at least 250 additional deaths recorded outside the city as of Sunday morning, the state's total fatalities were at least 1,026.

Japan will expand its entry ban to include citizens travelling from the United States, China, South Korea and most of Europe amid a rapid spread of the coronavirus pandemic, the Asahi newspaper reported.

The government may also ban entry from and travel to some countries in Southeast Asia and Africa, the Asahi said, citing a few government sources.

Panama's government confirmed seven new deaths from coronavirus, bringing the toll to 24 since the outbreak hit the Central American nation.

The national director of Epidemiology, Lourdes Moreno, said there are 88 new confirmed infections, bringing the total number of cases to 989. 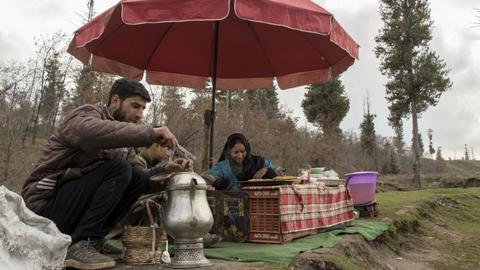