Demonstrations attended by thousands to demand improved security and the government's attention entered the seventh day after Pakistani tribal town Parachinar was hit by twin bomb blasts which killed 75 people.

Protests after twin bombings claimed 75 lives in Parachinar, the capital of Kurram tribal agency in Pakistan, entered the seventh day on Friday.

Several thousands of people also protested on Thursday, demanding humanitarian treatment, accountability and improved security after at least three brutal attacks over the past few months, officials and witnesses said.

The mainly Shia Muslim town of Parachinar is not new to violence. Bomb blasts there are common.

Part of Pakistan's Federally Administered Tribal Areas (Fata), governed by an archaic set of laws meted out by the federal government and its appointees, residents of the underdeveloped tribal agency have also volunteered alongside Pakistan's security apparatus to fight terrorist and militant groups operating in the tribal belt bordering Afghanistan.

The protests escalated after security forces opened fire on angry residents gathered to demand justice for the victims of June 23 bombings. This is not the first time a deadly blast in Parachinar, a mainly Shia Muslim area, has been followed by the use of fatal force by Pakistani authorities on protesters.

The first of two bombs that killed 75 people last week Friday went off at a crowded market where an Al Quds Day rally had just ended and shoppers were out buying supplies in preparation for the upcoming festival of Eid. As people rushed to the rescue of victims, a second, more powerful bomb went off, a common double tap technique used in Pakistan by terrorists.

A faction of the Pakistan-based Sunni militant group Lashkar-e-Jhangvi claimed responsibility for the attack. The attack was planned on the last Friday of the holy month of Ramadan which is seen by Muslims as one of the more venerated nights meant for prayer and salvation.

#Parachinar has a graveyard dedicated just for martyrs of terror attacks. One cant imagine their resolve and how deep are their grievences pic.twitter.com/19QdZqD8Oa

The sit-in centred in a town park started soon after last week's bombings, with protesters accusing authorities of continuously failing to ensure security. People from Parachinar and neighbouring areas have gathered every day since, hoping to draw the attention of the federal government, under whose authority Pakistan's tribal region is run.

On Thursday, the protest is estimated to have attracted 70,000 participants on Thursday, a former senator, Allama Abid al Hussaini, said.

A senior government official in the town said tens of thousands joined the protest.

Prime Minister Nawaz Sharif announced 1 million rupees ($10,000) compensation for the families of every victim of the blasts and 500,000 rupees for the wounded.

But the protesters dismissed that, saying they wanted to be recognised as humans first. One witness said victims of attacks in other places got more, a witness said.

"We are tired of picking up the dead bodies of our people," said Arshad Umerzai, a former provincial government minister.

Umerzai said the prime minister and army chief should visit Parachinar, which is close to the border with Afghanistan, in response to the violence the town has suffered. Instead, political parties have sent low-level operatives.

Authorities have not confirmed the fatalities, saying only they were investigating.

"We have sided with the security forces at every turn in fighting terrorism ... but the firing on protesters is uncalled for and action needs to be taken," Mazahiri said.

Security forces stopped media crew from travelling into the town to cover the protest on Thursday, saying they needed special permission.

Fata borders Afghanistan and has recently been the centre of a debate on legislation to bring it under some of the laws which cover the rest of Pakistan. 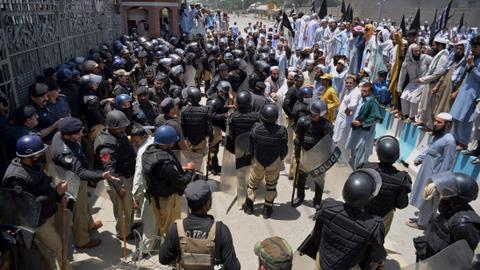 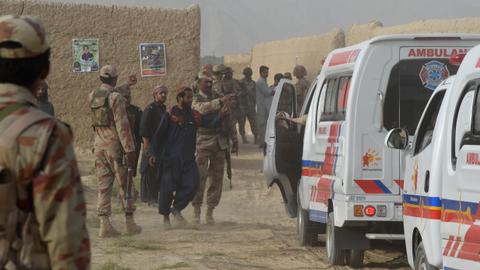 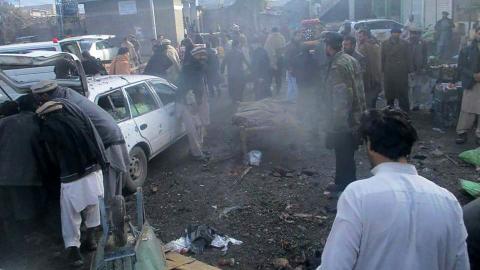