Citizens in five cities protest against the targeted lynchings of Muslims by mobs that accuse them of killing cows or eating beef.

Protests were held in cities across India on Wednesday against a wave of attacks on Muslims by mobs that accuse them of killing cows or eating beef.

The protests follow the stabbing to death last week of a 16-year-old boy accused of possessing beef on a train. Several people have been arrested. On Tuesday, a man was beaten and his house set on fire by a mob that accused him of slaughtering a cow in eastern Jharkhand state.

Many Hindus consider the cow a sacred animal.

A Facebook post by a filmmaker against the killing of the 16-year-old has led to an online campaign, with protest marches being organised in over a dozen cities across the country. Thousands pledged to hit the streets in support of the campaign, entitled "Not In My Name".

Lets reclaim the nation, reclaim Hinduism from the violent bigots, above all reclaim our rights as citizens! #NotInMyName

Waving "Not in My Name" banners and "Stop Cow Terrorism" placards, actors, writers and young mothers cradling babies braved monsoon rains in Mumbai, Kolkata and other cities, while in Delhi a cast of intellectuals and activists were joined by relatives of recent lynching victims.

"I feel afraid. I don't even know if I will be able to reach home safely," Bashruddin Khandawali, a 24-year-old cousin of Junaid Khan, who was killed last week on the train, said while standing next to a huge "Lynch Map of India" banner.

Critics accuse right-wing Hindu groups, some linked to Prime Minister Narendra Modi's party, of fomenting or not doing enough to stop violence against Muslims and lower-caste Hindus who eat beef or work in the meat and leather industries.

Almost all of the 63 attacks since 2010 involving cow-related violence were recorded after Modi and his Hindu nationalist government came to power in 2014, IndiaSpend, a data journalism website, said in a report.

Twenty-eight people, 24 of them Muslims, have been killed and 124 injured since 2010 in cow-related violence, IndiaSpend said.

Pratap Bhanu Mehta, a leading commentator, this week described the lynchings as "a protracted riot in slow motion".

"What makes this violence chilling ... is that it is acquiring an atmosphere of a religious communion about it," he wrote in the Indian Express.

Anjali Arondekar, a professor visiting from California, said she had attended the Mumbai protest because "nobody seems to care any more that a young Muslim man is being killed."

India's history is pockmarked by Hindu-Muslim communal clashes, although the vast majority of people live peacefully together.

Community leaders called on Modi to do more to protect the 14 percent of India's 1.3 billion people who are Muslim.

"I fear that if this goes on, there will be a counter-reaction that would be dangerous for peace and tranquillity," said Navaid Hamid, president of the All India Muslim Majlis–e-Mushawarat. 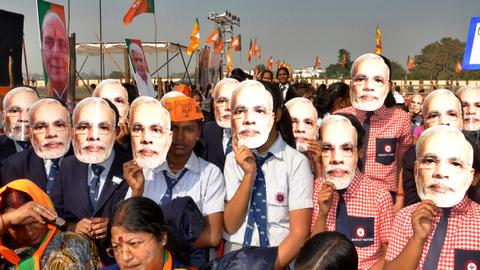