Two Chinese giant pandas made their public debut on Thursday at an amusement park in South Korea, delighting adults and children alike.

They had been under quarantine for about 50 days at their new home at Everland in Yongin, an amusement park with its own zoo.

"Ai Bao is coy. She likes to spend time eating or resting in a tree rather than playing. Le Bao is mischievous, so he likes to roll around, swim, and climb trees. He is very active and will be popular among visitors," South Korean panda keeper at Everland, Kang Cher-won, said.

"I've seen pandas only in pictures and books, but seeing them in person, they were so cute," said eight-year-old elementary student, Seo Seung-yeon.

"We heard pandas from China were in Korea. My child had never seen a panda before so that's why we came. The pandas were so cute and my child liked them too, so I'm glad we came," added 32-year-old Pak Bo-ram, another visitor who came with her one-year-old son.

China has been sending their black and white ambassadors abroad in a sign of goodwill since the 1950s as part of what is known as 'panda diplomacy'.

The pair, the first in South Korea in 22 years, will live at their new home on a 15-year loan, as agreed by the two countries during a summit in 2014, according to South Korea's presidential office. 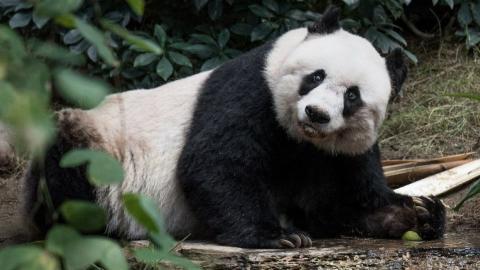