UN Security Council instructs its sanctions committee to redouble efforts to implement a raft of tough measures against North Korea.

In a unanimous statement backed by China, Pyongyang's ally, the council instructed its sanctions committee to redouble efforts to implement a raft of tough measures adopted last year.

The US-drafted statement was nearly identical to one adopted last week after the launch of an intermediate-range missile that Pyongyang said was capable of carrying a "heavy" nuclear warhead.

It was the latest test-firing in a series this year as Pyongyang steps up its efforts to develop an intercontinental ballistic missile capable of hitting the United States.

The KCNA state news agency quoted Kim as saying the Pukguksong-2 met all the required technical specifications so should now be mass-produced and deployed to the Korean People's Army strategic battle unit.

Pyongyang has defied all calls to rein in its nuclear and missile programmes, even from China, its lone major ally, saying the weapons are needed for defence against US aggression.

The Security Council will hold a closed-door emergency meeting on Tuesday at the request of Japan, South Korea and the United States to discuss further action in response to the latest missile test.

The medium range missiles could be capable of reaching Japan and the US military bases there.

After a previous test on May 14, the council met to discuss tightening sanctions but there was no concrete action.

During last week's closed-door meeting, China insisted that there be no mention of a resolution in remarks read by the council president at the end of the meeting, diplomats said.

North Korea has carried out two atomic tests and dozens of missile launches since the beginning of last year in its quest to develop a missile capable of delivering a nuclear warhead to the continental United States.

Under UN resolutions, North Korea is barred from developing nuclear and missile technology. 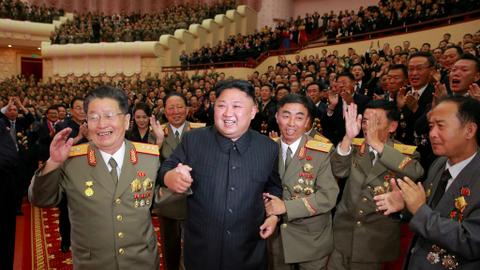