The leaders of the US and China, the world's two largest economies, are expected to lay out competing visions for the future of global trade on Friday in closely-watched speeches to Asia-Pacific leaders gathered in Vietnam.

US President Donald Trump is likely to wield his "America First" doctrine when he addresses CEOs ahead of the Asia Pacific Economic Cooperation (APEC) forum at the Vietnamese resort of Da Nang.

In a day mixing big hitters of politics and business, Trump will share the venue with world leaders ranging from Russia's Vladimir Putin, Japan's Shinzo Abe and China's Xi Jinping who is casting his country as the new architect of global free trade.

Trump arrives from trips to Tokyo, Seoul and Beijing where he sought to build a consensus against North Korea's nuclear ambitions and repeated his disquiet with "unfair" trade conditions that he says are syphoning off American jobs.

Xi, who laid on a lavish welcome for Trump, touches down in Da Nang on Friday afternoon but carrying a very different message.

He is likely to double-down on his commitment, delivered at the recent Communist Party Congress, that China is ready and able to step up into the role of global free trade leader vacated by America.

As the US retreats behind "economic nationalism," China will take a stride forward, Ian Bremmer, of the political consultancy Eurasia, said.

"It's very clear that the comparative vacuum that you experience in the world, especially in China's backyard right here with APEC, is something that Xi Jinping sees as an opportunity," he said.

He has pledged to wring a better deal from countries the US has large trade deficits with – including China – and bring jobs back to the hollowed out industrial heartland that voted for him.

But proponents of free trade, including many allies, have looked on aghast as Trump tears up a rulebook.

He has already pulled Washington's support from the sprawling 12-nation Trans Pacific Partnership (TPP) trade pact and has vowed to renegotiate NAFTA, a trade deal between the US, Canada and Mexico.

The annual APEC summit is one of the largest gatherings on the annual diplomatic calendar, bringing together numbers of world leaders and more than 2,000 CEOs.

APEC represents 21 Pacific Rim economies, the equivalent of 60 percent of the global GDP, and has long pushed for freer trade rules.

Any meeting between Trump and Putin will be a box-office event with Russia accused of interfering in the US election last year that brought the billionaire one-time reality TV star to power.

Facebook's chief operating officer Sheryl Sandberg is also among those speaking at APEC.

Facebook and its fellow social media giants Google and Twitter are under intense pressure after Russian-paid content spread discord and fake news ahead of last year's presidential election in the US. 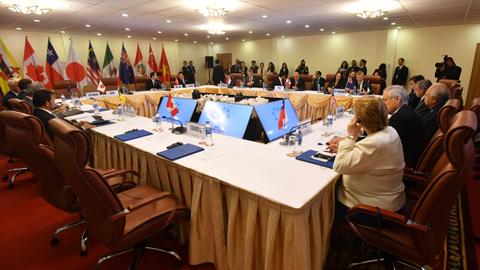