US says China agreed to abandon some export subsidies

China has agreed to scrap some export subsidies on a range of products from metals to agriculture and textiles, the United States said, in a step by Beijing to reduce trade frictions with Washington.

China ended a program which provided export subsidies of some $1 billion over three years to Chinese companies in seven economic sectors, the US Trade Representative's office (USTR) said.

Some industry executives were skeptical about the deal's impact given remaining disputes over other support that China gives to its exporting industries. Steel has been a particular flashpoint.

One source knowledgeable about the agreement said it was not comprehensive enough to do much to help the US steel industry, given its focus was only on specialty steel products.

In part, the dropping of the subsidies is an effort by China to move away from labor-intensive production and emphasize more sophisticated industries such as semiconductors.

"The Chinese want to become a high-tech country. They want to move up the value chain," said James Lewis, a senior fellow at the Center for Strategic and International Studies.

But White House spokesman Josh Earnest said the accord "is an example of how committed this administration is to ensuring that we're fighting in the international community for American businesses and American workers."

The US had complained to the World Trade Organization about the program, alleging unfair practices by China.

The Chinese industries that have received the subsidies under the program include textiles, light industry, specialty chemicals, medical products, hardware, agriculture and advanced materials and metals, including specialty steel and aluminum products, the trade representative's office said.

Since it joined the WTO in 2001, China has frequently drawn complaints that its exports are being "dumped," or sold at unfairly cheap prices on foreign markets.

"China has been firmly committed to the WTO rules, continuously expanded its opening-up, deepened the reform of its foreign trade system, improved its foreign trade legal system, reduced trade barriers and administrative intervention," Zhu said in an email.

US Steel Corp President and CEO Mario Longhi said he was cautious about the latest Chinese move.

"People can say whatever they want, and I think China has been saying a lot of things for the past couple of decades," Longhi told reporters in Washington. "You need to ask yourself what, from a practical perspective, is really happening. We need to see the proof in actions, not just in verbiage."

The US steel industry is under huge pressure this year from cheap imports, a strong dollar, and falling oil prices, which have decimated demand for steel tubes used by the oil and gas industry.

‘Not a big concession'

Experts in China downplayed the significance of the deal.

Tu Xinquan, a WTO expert at the University of International Business and Economics in Beijing, said it was not a big concession for Beijing, and officials in Washington may have "exaggerated their success."

"It was a very small amount of money. The use of such projects was marginal," Tu said.

In a sign of the obscurity of the program, officials from the China Nonferrous Metals Industry Association and the China Iron and Steel Association told Reuters separately they were not previously aware of the program and that aluminum and steel smelters and mills were not widely involved.

China still has other forms of support for industry, including relatively cheap and easy credit from state banks, state-regulated power prices that have often favored industry, and low prices for other inputs such as water.

"While it is clearly an important result, it is only one feature in a universe of other measures that China foresees for its steel sector," said Karl Tachelet, trade director at European steel industry body EUROFER. 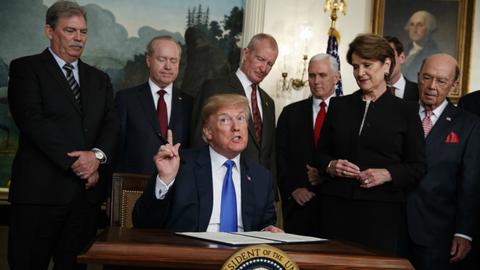 China targets $3 billion in US goods over Trump's steel tariffs