Families on reduced aid will receive barely half of the World Food Programme's daily minimum ratio but the five million people at immediate risk of slipping into famine will keep the full ratio.

The World Food Programme (WFP) has said it will reduce food rations for 8 million people in Yemen from January due to a lack of funds, warning of further cuts if more money does not come through.

Families on reduced handouts will receive barely half of the WFP's daily minimum ratio. Other food assistance and child malnutrition programmes are at risk of further cuts, the WFP said in a statement on Wednesday.

Five million people at immediate risk of slipping into famine will keep the full ratio, the WFP added.

WFP said that it needs $813 million to continue to help the most vulnerable in Yemen through May and $1.97 billion during 2022 to continue to deliver food assistance to families on the brink of famine.

"Every time we reduce the amount of food, we know that more people who are already hungry and food insecure will join the ranks of the millions who are starving. But desperate times call for desperate measures."

The agency feeds 13 million people a month in Yemen.

The UN warned in March of a "death sentence" against Yemen after a donor conference yielded less than half the funds needed to prevent famine.

It had appealed for $3.85 billion to pay for urgently needed aid, but just $1.7 billion was offered at a virtual pledging conference co-hosted by Sweden and Switzerland.

Shrinking humanitarian budgets last year forced the closure of many programmes, including health services and food distribution, heaping hardship on a country the UN has said is already witnessing the world's worst humanitarian crisis.

According to the latest UN figures, more than 16 million Yemenis, about half the approximately 30-million population, will face hunger this year. Nearly 50,000 are already starving to death in famine-like conditions. 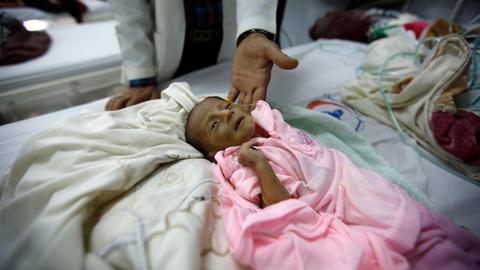