Rosmah Mansor was charged with 17 counts of money laundering and claimed trial Thursday, five months after her husband's shocking electoral loss due to public outrage at the scandal. She plead guilty to all charges.

The wife of former Malaysian Prime Minister Najjib Razak has pleaded not guilty to laundering illegal proceeds from the scandal at the 1MDB state investment fund.

Rosmah Mansor was charged with 17 counts of money laundering and claimed trial on Thursday, five months after her husband's shocking electoral loss due to public outrage at the scandal.

Rosmah was arrested by the anti-graft agency at its office Wednesday after being questioned a third time over alleged theft and money laundering at the fund.

She has smiled and waved at reporters as she was escorted into court but said little.

Former prime minister Najib also appeared at the court building on Thursday for the management of his own corruption trial over the 1MDB scandal.

He has also pleaded not guilty and accused the government of seeking political vengeance. He faces trial next year.

In a biography in 2013, Rosmah said it was common for a prime minister's wife to receive expensive jewelry and gifts.

She also said she had earned money from an album that wasn't released to the public but was bought by government ministers who were fans of her singing talent. 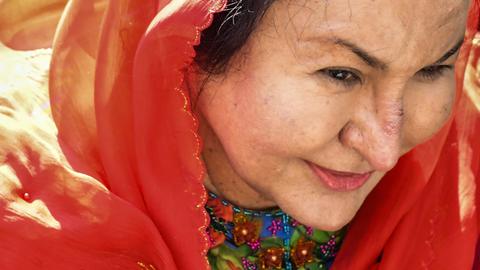