But most markets gave back some gains after the World Bank said it was downgrading its forecast for the global economy in light of trade conflicts and other strains.

Shares surged Wednesday in Asia following a rally on Wall Street spurred by signs the Federal Reserve is ready to cut interest rates to support the US economy against risks from escalating trade wars.

In a speech in Chicago, US Fed Chair Jerome Powell acknowledged trade conflicts had dimmed the growth outlook – remarks widely seen as opening the door to a potential interest rate cut.

"We are closely monitoring the implications of these developm ents for the US economic outlook and, as always, we will act as appropriate to sustain the expansion," Powell said.

That marked a shift from recent Powell statements, driving US stocks, already positive on optimistic trade news, even higher.

Worries over trade tensions receded "following reports that China's commerce ministry said the trade friction should be resolved through dialogue, and reports that US Republicans are moving to block" US President Donald Trump's plan to impose fresh tariffs on all Mexican goods, said Mitsuhiro Shibata, strategist at Daiwa Securities.

Shares also were boosted by the Australian central bank's decision on Tuesday to trim its benchmark interest rate by a quarter of a percentage point in the first such cut in nearly three years.

Australia's economy expanded at a 1.8 percent annual rate, 0.4 percent quarterly, in the first quarter, as the doldrums in trade and the housing market were offset by large inventories, the government reported Wednesday.

Mexican Foreign Minister Marcelo Ebrard said Mexico can likely reach a deal with the US at a meeting Wednesday. That would stave off Trump's threat to place 5 percent tariffs on Mexican goods beginning June 10 as part of a broader immigration dispute.

Investors have been worried that the expanding conflicts between the US and some of its biggest trading partners could slow US economic growth and stymie corporate profits. They've been dumping stocks for the past month and fleeing to safer holdings such as bonds.

The Nasdaq composite rode the rally in technology stocks, gaining 2.7 percent, to 7,527.12.

Powell didn't explicitly say what the Fed would do, but investors in the futures market are now pricing in a 59 percent chance of a Fed rate cut by July.

Robust market gains earlier this year were partly fueled by the Fed's adoption of a more patient approach to its rates policy after steadily raising rates for two years. Investors have been hoping it will go further and cut interest rates to give the economy another push.

But most markets gave back some gains after the World Bank said it was downgrading its forecast for the global economy in light of trade conflicts and other strains.

The World Bank said it expects the world economy to expand at a 2.6 percent pace this year, the slowest growth since 2016 and below its 2.9 percent forecast made in January.

"We are not pushing the panic button yet," said Ayhan Kose, a World Bank economist. But he said the anti-poverty agency foresees a potentially deeper slowdown if trade hostilities persist. 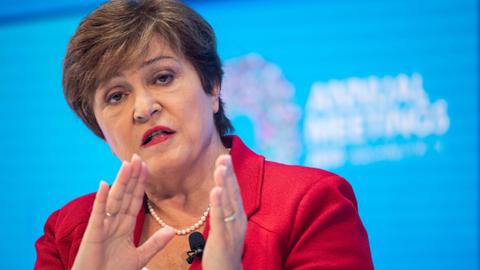