Carmaker sees shares fall 6.5 percent to as low as $23 despite still being valued slightly higher than Ferrari.

Shares in luxury automaker Aston Martin fell as much as 6.5 percent on their market debut in London on Wednesday as investors and analysts raised concerns over its ability to deliver an ambitious roll-out of new models.

The company, which last year made its first profit since 2010 and has gone bankrupt seven times, had priced its shares at $24.70 each, giving it a market capitalisation of $5.63 billion.

"(It) has very aggressive growth plans. The execution of that growth needs to be flawless - nothing eats cash more than a car company when the cycle turns. There is concern that it's more cyclical than the commentary has been," said James Congdon, managing director of cash flow returns specialist Quest.

"The banks have done a good job for their client - but there's no bounce."

The company is investing all of its cash flow to try to achieve this, leaving nothing for dividends or paying down debt.

"In terms of execution risk - this is what I've done for all of my career. I'm an engineer: we mitigate risk," Chief Executive Andy Palmer, who has led a turnaround plan at the company since 2014, told Reuters.

Palmer played down risks to the business from Britain leaving the European Union, even as other car manufacturers step up warnings over a disorderly Brexit.

He said Aston Martin was "relatively well insulated" from the effects of Brexit because Europe is not its biggest market and it may actually benefit from exporting with a cheaper pound.

However, 60 percent of its parts are imported from the EU and will be hit by tariffs if there is no trade deal.

"Obviously we'd all prefer no tariffs to be frank, no doubt, but the industry has to learn to adapt and it always has adapted to changes," Palmer said.

In 2017, Aston Martin had adjusted earnings before tax interest, depreciation and amortisation (EBITDA) of $268 million, up from $131 million in 2016.

Its closest stock market comparable is Ferrari, which listed in 2015 and trades at an enterprise value (debt plus equity) of 22.2 times EBITDA, according to Refinitiv data.

Based on this metric and Aston Martin's net debt of $700 million, the British carmaker was priced at 23.6 times EBITDA on its debut.

Depending on its relative price performance, Aston Martin might make it into the FTSE 100, becoming the first carmaker in Britain's blue-chip index since Jaguar.

Its shareholders, which include Italian investment firm Investindustrial and a group of Kuwait-based investors, sold a quarter of the company's stock in the initial public offering (IPO). The company did not raise any money for its own purposes.

A banker familiar with both deals, who did not want to be named, said: "This is brutal. The IPO market stinks for growth stocks which do not have an earnings track record." 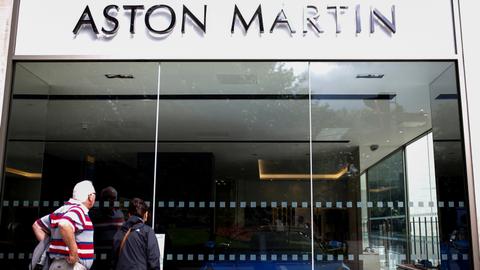