Australia is reeling from bushfires that since September have claimed 28 lives, including two on Kangaroo Island, and razed 10 million hectares (25 million acres) of land -- an area larger than South Korea or Portugal.

In the wake of ferocious bushfires that tore through Kangaroo Island, local farmer Rick Morris has endured the gruelling task of burying 400 sheep killed when most of his sprawling property went up in flames.

"It puts it in perspective to say that we're one of the lucky ones," he said.

Australia is reeling from bushfires that since September have claimed 28 lives, including two on Kangaroo Island, and razed 10 million hectares (25 million acres) of land -- an area larger than South Korea or Portugal.

Vast swathes of the burned land were used for grazing cattle and sheep, and officials believe the livestock toll exceeds 100,000 across Australia -- including at least 43,000 on Kangaroo Island alone, where farmers like Morris endured three blazes in just 10 days.

"The fire (swept) from the south side to the north side of the island and took no prisoners between... I'm amazed there were not more people killed."

Faced with the scale of the disaster, Australia's army has deployed 3,000 soldiers to assist in bushfire-affected areas.

Here, the defence force flew in firefighters from the mainland and dropped bales of hay from helicopters to farmers isolated by fires in the island's western reaches.

"I've seen a level of destruction which is still surprising me now," he told AFP.

"There's a lot of farmers that are in distress, a lot of community members are struggling, some families have lost everything, and they're struggling to find out where they can move forward from here," he said.

"There's no end date assigned to this mission, and it's very important that there's no sense of anyone... thinking about when this is going to end."

Pushed 'to the brink'

Kangaroo Island's agriculture industry is worth Aus$150 million (US$100 million), and farming is the island's biggest employer.

Local agronomist Daniel Pledge said farmers would need to buy extra feed for their livestock, pasture seed to restore burned paddocks and animals would be likely to conceive at lower rates due to stress -- causing lasting impacts from the fires.

"It's a snowball effect that we can't measure and we're very concerned for our local economy, to be honest," he told AFP.

"And these effects could flow on for up to five years, for certain individuals. And that is a long time."

The country's farmers had already been battered by a prolonged drought that has crippled water supplies in rural areas across the vast and arid continent's southeast.

National Farmers' Federation president Fiona Simpson said they were increasingly under pressure across the country.

"Whether it's the drought or the recent bushfires, dry conditions are pushing many of our farming communities to the brink," she said.

"It's a situation that grows graver each day, and shows no signs of abating."

In response, the government has promised immediate support payments of Aus$75,000 (US$50 million) to aid in farmers' recovery, which will be drawn from a Aus$2.0 billion ( US $1.3 billion) bushfire relief package.

Morris, who is also the chairman of Kangaroo Island's agriculture industry body, said the financial support would be welcomed on the island.

For now, though, he is keeping his remaining 4,500-strong flock close until the bushfire threat passes.

"We're hand-feeding them for all their nutrient needs, and that'll be the case until April (or) May when it rains, hopefully," he said.

The mental and financial toll on farmers is likely to claim some of the island's agriculture businesses, but many are already starting to look to the future. Morris, for one, is optimistic.

"When this fire settles down, we'll be able to regroup... and move forward as a whole community," he said. 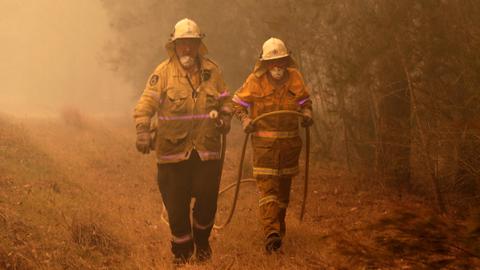