Foreign ministers and other officials from more than 60 countries have gathered for the conference in Warsaw. The agenda has included Iran, conflicts in Syria, Yemen and Israeli-Palestinian peace.

Although it is absent from the stage, Iran is nevertheless taking the spotlight at a Middle East security conference co-hosted by the United States and Poland that has highlighted deep divisions between the US and some of its traditional allies.

Amid uncertainty over its aims and questions about what it will deliver, the conference opened late Wednesday in Warsaw with some 60 nations in attendance. Yet, in an apparent test of US influence and suspicions in Europe and elsewhere over the Trump administration's intentions in Iran, many countries aren't sending their top diplomats and will be represented at levels lower than their invited foreign ministers.

Israeli Prime Minister Benjamin Netanyahu and US Vice President Mike Pence attended along with Secretary of State Mike Pompeo and his counterparts from numerous Arab nations. But France and Germany are not sending Cabinet-ranked officials, and European Union foreign policy chief Federica Mogherini is staying away.

Russia and China aren't participating, and the Palestinians, who have called for the meeting to be boycotted, also will be absent. Iran, which is this week celebrating the 40th anniversary of its revolution, denounced the meeting as a "circus" aimed at "demonising" it.

In a bid to encourage better participation, Pompeo and others sought to broaden what was initially advertised as an Iran-centric meeting to include the Israeli-Palestinian conflict, the fight against Daesh, and the conflicts in Syria and Yemen. That effort produced only mixed results, particularly with longtime European allies who are trying to save the 2015 Iran nuclear deal after last year's US withdrawal.

And, while the agenda gives no hint of any concrete actions that might result beyond creating "follow-on working groups" on a variety of common concerns like terrorism and cybersecurity, comments from several participants belied the underlying theme: countering Iran.

Pence will address the conference on a range of Middle East issues, Pompeo will talk about US plans in Syria following President Donald Trump's decision to withdraw US troops and Trump's senior adviser and son-in-law Jared Kushner and his peace partner, Jason Greenblatt, will speak about their as-yet-unveiled Israeli-Palestinian peace plan.

Greenblatt, whose portfolio extends only to the Israeli-Palestinian peace effort, said Iran is the top priority and derided the Palestinians for their boycott and insistence that their case is the region's most important issue.

In a series of tweets on Wednesday, Greenblatt said the Palestinian position "impedes nations from countering the common enemy of Iran."

"Iran is the primary threat to the future of regional peace/security," he said. "That's what Palestinian leaders don't grasp; as a consequence of being detached from new realities, we see Palestinians increasingly left behind/more isolated than ever."

Iran is the primary threat to the future of regional peace/security. That’s what Palestinian leaders don’t grasp; as a consequence of being detached from new realities, we see Palestinians increasingly left behind/more isolated than ever. Very unfortunate for the Palestinians 3/3

On his way to Warsaw Netanyahu made clear the conference is centred on Iran.

Netanyahu sent out a belligerent rallying cry to his Arab partners, saying he planned to focus on the "common interest" of confronting Iran. He made the comments during an off-the-cuff interview with reporters on a Warsaw street, shortly after meeting Oman's foreign minister.

Although Netanyahu used the Hebrew word "milchama," or "war," in his comments, his office later changed its official translation and said he was referring to a "common interest of combatting Iran."

Pompeo has predicted that the conference will "deliver really good outcomes" and has played down the impact of lower-level participation. "We think we will make real progress," Pompeo said. He didn't, however, offer any details about specific outcomes.

Polish Foreign Minister Jacek Czaputowicz, the conference co-host, also steered clear of describing potential results. And, even he could not paper over the differences between the US and Europe, including Poland, over the Iran nuclear deal.

"We consider this to be a valuable element on the international arena," Czaputowicz told a joint news conference with Pompeo on the eve of the conference.

In a joint opinion piece published Wednesday by CNN, Pompeo and Czaputowicz said they didn't expect all participants to agree on policies or outcomes but called for an airing of unscripted and candid ideas.

"We expect each nation to express opinions that reflect its own interests," they wrote. "Disagreements in one area should not prohibit unity in others."

In fact, three of Washington's main European allies, Britain, France and Germany, have unveiled a new financial mechanism that the Trump administration believes may be designed to evade US sanctions on Iran. British Foreign Secretary Jeremy Hunt is attending the Warsaw conference, but his main interest is in a side meeting on the conflict in Yemen, according to diplomats familiar with the planning.

Analysts and former officials associated with the Obama administration that forged the nuclear deal as a signature foreign policy achievement questioned the value of the conference, particularly the signs of disunity it will present.

"The result of this conference ideally would be a demonstration of Iranian isolation and unity amongst American allies in Europe and the Middle East," said William Wechsler, senior adviser for Middle East programs at the Atlantic Council in Washington.

"It's another example of what we've seen of countries in Europe demonstrating — sometimes subtly and sometimes not — their differences with the American administration," he said. "If at the end of the day it looks like America is being isolated from its partners, then it's not as successful as you want it to be."

And Ned Price, President Barack Obama's former national security spokesman, said European nations downgraded their delegations because they believed the Trump administration was going to use the summit as an "anti-Iran pep rally."

"Time and again, this administration had found itself drunk on its own Kool-Aid, isolated from our friends, and belatedly forced to scramble to save face," Price said, adding that not a single country in the EU endorsed Trump's pullout from the Iran nuclear deal.

The Trump administration has repeatedly denied allegations that it is seeking regime change in Iran. And yet, mixed messages continue to come from Washington.

Earlier this week, Trump's national security adviser John Bolton released a short video on the anniversary of the Iranian revolution in which he called Iran "the central banker of international terrorism" and accused it of pursuing nuclear weapons and missiles to deliver them. It ended with a not-so-veiled threat to Iran's Supreme Leader Ayatollah Ali Khamenei: "I don't think you'll have many more anniversaries to enjoy."

Khamenei, meanwhile, denounced the United States in a speech on Wednesday.

"About the United States, the resolution of any issues is not imaginable and negotiations with it will bring nothing but material and spiritual harm," Khamenei said. He described any possible future negotiations as an "unforgivable mistake" that would be like "going on your knees before the enemy and kissing the claws of the wolf." 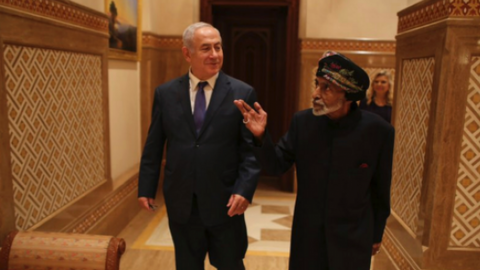 Are the Arabs joining hands with Israelis to counter Iran? 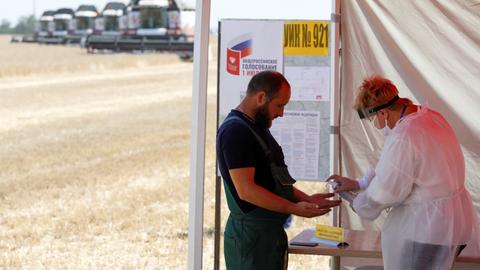