Three military conscripts and one train passenger died and another 11 were injured. The cause of the accident is not yet known.

Three military conscripts and a passenger were killed when a train crashed into an army truck in southern Finland on Thursday, injuring 11 others, officials said.

"Four dead and many injured in train accident," police wrote on Twitter.

The army said on its website that three conscripts died and another four were injured in the crash in Raasepori around 8 am (0500 GMT).

A total of eight conscripts were in the vehicle, and one was unharmed. Police said one passenger on the train had died.

Photos from the unguarded level crossing in Raasepori showed the wrecked, green vehicle beside the railroad tracks in a snow-blanketed forest.

The front of the train, which had only one carriage, was also damaged.

"The morning started with grim news from Raasepori. My main sentiment is grief," Defence Minister Jussi Niinisto wrote on Twitter.

Prime Minister Juha Sipila, on a visit to Bolivia, tweeted, "I heard the shocking and sad news from Raasepori. My warmest condolences to the relatives of the victims, strength to the injured."

The 11 injured were taken to two local hospitals and were in stable condition, authorities said.

Local media reported that the truck was taking part in a military exercise at the time, but the cause of the accident was not immediately known.

"Safety at crossings is not good enough in Finland," a representative for the country's accident investigation centre said.

Snowfall may have led to poor visibility or road conditions. Light snow was falling when rescue crews arrived at the scene.

In Finland, the last serious accident was in 1998 when a train travelling at more than 100 km-per-hour (62 miles-per-hour) derailed in Jyvaskyla, killing 11 people and injuring 39. 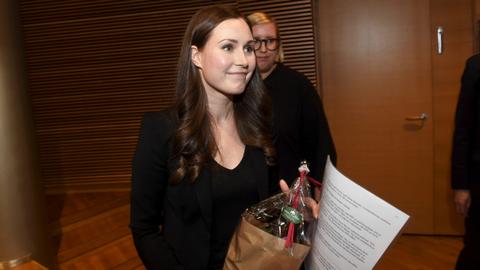