As Kosovo commemorates its 2008 declaration of independence, one a diner is busy serving up food from countries which do not recognise the former Yugoslav state.

One particular restaurant in Belgrade has taken the Serbia-Kosovo fight to its menu.

As Kosovo commemorates its 2008 declaration of independence on February 17, Serbian diner Korcagin is busy serving up dishes from countries which do not recognise the ex-Yugoslav state.

Kosovo is recognised as its own country by over 100 nations, but not by the one from which it unilaterally separated, Serbia.

Last year Kosovo decided to set a 100 percent import tariff on Serbian goods until Belgrade recognised its sovereignty and stopped preventing it from joining international organizations.

Serbia has said the tariff is costing a lot to its businesses and it won't take part in the dialogue until the measure is lifted.

From the food of Palau to the cuisine of Comoros, Vukojevic serves food from countries which do not recognise Kosovo or have revoked recognition, such as the tiny Micronesian island in the Western Pacific.

"We have made dishes from 65 countries since then, out of which 13 got special preference on the list because they withdrew their recognition of Kosovo." 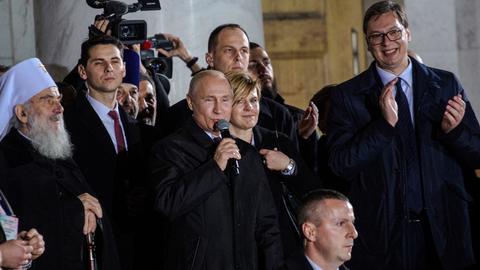 Russia's Putin calls on stability for the Balkans