UK's Peterborough city was very pro-Brexit in last year's vote to leave the EU. Now that it's time to leave, there is concern, but confidence about the future.

A day after the UK formally notified the EU about its historic break from the European bloc, locals in the city of Peterborough, north of London, say the move could inflict short term sacrifices, but will be beneficial to the long term interests of the UK.

In Peterborough - also known as the Brexit heartland - 61 percent of the electorate voted to leave the EU, making it one the most pro-Brexit cities in the UK.

Home to one of the largest Polish communities in the country, more than 30,000 migrants have settled in the city since 1999.

There are economic concerns over possible repercussions on supply chain both in terms of the raw materials and the workers coming from outside.

While none in Peterborough can know if Brexit will ultimately be a success or a failure, few think they have made the wrong decision during the referendum vote of June 2016.

TRT World's Sarah Morice went to Peterborough to gauge the mood of the city. 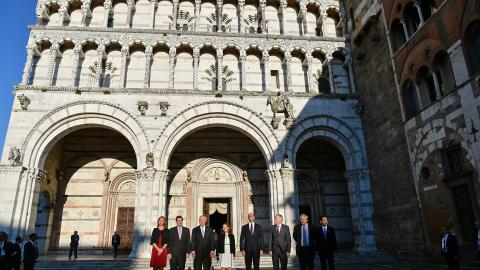 G7 states reach no deal on sanctions against Russia and Syria