Paul Nuttall takes helm of the anti-EU party at a time when it struggles to capitalise on a successful Brexit campaign and overcome months of internal turmoil.

Nuttall, an elected member of the European parliament since 2009, takes up the challenging role at a time when the anti-EU UKIP struggles to overcome months of internal turmoil and capitalise on its Brexit vote victory.

While Farage has gone on to become a high-profile ally of US President-elect Donald Trump since the June referendum, UKIP has struggled to build on the anti-establishment sentiment it harnessed during the EU referendum campaign.

Tensions within the far-right UKIP burst into the open when newly-elected party leader Diane James stepped down in October just 18 days after winning a previous leadership ballot.

A fight then broke out between UKIP MEPs in the European Parliament in Strasbourg that put then leadership favourite Steven Woolfe in hospital.

Nuttall, 39, promised to unite the party which has been under threat from bitter infighting and a plunge in funding following Farage's departure announcement.

"I will build a team of all talents from all wings of the party," Nuttall said, adding that his call for unity had received the biggest mandate in the history of the party.

Nuttall, a former history lecturer, said his role would be to ensure that there will be no backsliding on Brexit by the government. 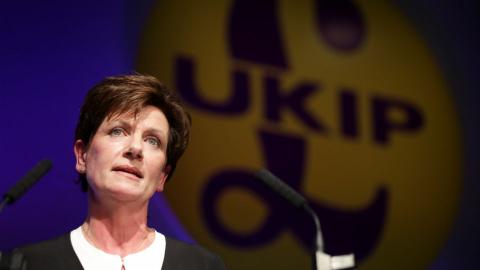