Britain's highest court said the government must get approval from parliament to trigger Brexit. The UK still intends to leave the EU but the ruling will delay Prime Minister Theresa May's plans to speed up the process.

What are the key points from the court ruling?

A panel of 11 judges found that the government cannot trigger Article 50 unless authorised by parliament. The judges ruled 8-3 against the government.

They dismissed Prime Minister Theresa May's argument that the government could use executive powers, known as the "royal prerogative," to invoke Article 50 of the EU's 2009 Lisbon Treaty, which would've allowed Britain to notify the EU of its intention to leave, without parliamentary approval.

The judges said May did not need the approval of the UK's devolved assemblies in Scotland, Wales and Northern Ireland before triggering Brexit.

Why is the ruling significant?

It means May cannot her use executive powers to start the process of Britain's exit from the EU, without parliament's approval.

May said she would trigger Article 50 before the end of March, but she now has to seek the consent of lawmakers first. This could delay the process or see May revise her plans altogether.

Now legislation will be prepared for MPs and Lords to vote on.

​The referendum is of great political significance, but the Act of Parliament which established it did not say what should happen as a result... So any change in the law to give effect to the referendum must be made in the only way permitted by the UK constitution, namely by an Act of Parliament."
- David Neuberger, President of the Supreme Court.

How did the government respond?

A spokesperson said the government will respect the court's decision but insists the ruling doesn't change plans to exit the EU.

"It's important to remember that parliament backed the referendum by a margin of six-to-one and has already indicated its support for getting on with the process of exit to the timetable we have set out," said the spokesman.

The Attorney General Jeremy Wright said the government will comply with the judgement and "do all that is necessary to implement it."

How did the opposition respond?

An spokesperson for opposition Labour leader Jeremy Corbyn said they would look to amend the bill but not slow down May's timetable.

"Labour will seek to amend the Article 50 bill to prevent the Conservatives using Brexit to turn Britain into a bargain basement tax haven off the coast of Europe," said the spokesperson.

"Labour is demanding a plan from the government to ensure it is accountable to parliament throughout the negotiations."

Britons are saying the ruling could lead to "soft Brexit" instead of a "hard Brexit." What does that mean?

A "hard Brexit" is an agreement with the EU that puts immigration curbs above access to the single market.

A "soft Brexit" means the UK prioritises access to the European single market and ends ties with the bloc over immigration controls.

Last week, May set out a course for a "hard Brexit", promising a clean break with the world's largest trading bloc as part of a 12-point plan to focus on global free trade deals.

However the prospect of a "soft Brexit" is now on the table. There is an opportunity for Labour and other lawmakers to have a greater influence on what the final deal should look like. Pro-EU politicians hope they will be able 'soften' the terms of the withdrawal from the bloc.

Before the June referendum, the majority of British legislators wanted to stay in the EU.

If Britons voted for Brexit, why hasn't it taken effect?

The process of Britain leaving the EU takes two years. This gives Britain and the EU, sufficient time to agree on the terms of the split.

May intended to invoke Article 50 of the by the end of March, which would've begun the process but the court decision changes that.

More than 30 million Britons voted in the historic referendum and the Leave campaign won by 52% to 48%.

It seems possible but is highly unlikely.

"The British people voted to leave the EU, and the government will deliver on their verdict – triggering Article 50, as planned, by the end of March," May's spokesman said.

The Labour Party said it would not block Brexit, although it would try to amend the legislation. Conservative MPs have also pledged not to vote against leaving the EU, saying they must respect the will of British voters.

Media reports suggest that up to 80 Labour lawmakers in the 650-member House of Commons lower chamber would vote against triggering Article 50. The small Liberal Democrat Party said it would oppose Brexit unless there was a second referendum on the final deal.

Some investors and officials who wanted to stay in the EU hope that lawmakers will force May to seek a deal which prioritises access to the European single market of 500 million people. Some may attempt to block Brexit altogether. 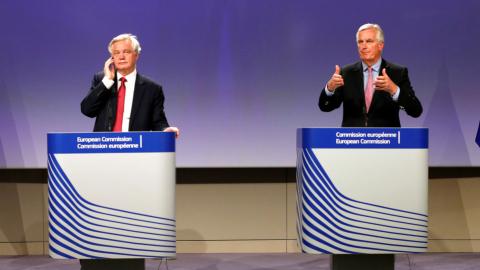