Mediators hope to help the leaders of the ethnically divided island of Cyprus find a breakthrough in stalemated reunification talks.

United Nations Secretary-General Antonio Guterres will meet with the Greek Cypriot and Turkish Cypriot leaders in New York on Sunday, his spokesperson said.

Guterres will meet with Greek Cypriot leader Nicos Anastasiades and Turkish Cypriot leader Mustafa Akinci "to discuss the Cyprus talks and the way forward," his spokesperson Stephane Dujarric said in a statement.

The scheduled meeting comes after the UN envoy to Cyprus, Espen Barth Eide, said last week that he was ending a shuttle diplomacy bid to continue talks in Geneva because the two sides had failed to agree on conditions.

Failure to agree on further negotiations effectively throws the two-year process of Cyprus peace talks into limbo, though the UN said talks had not collapsed.

Cyprus was split in 1974 when Turkey, as a legal guarantor of peace on the island in accordance to an international treaty, militarily intervened in response to a Greek-inspired coup.

The island's coup leaders sought the annexation of Cyprus by Greece, a mission they called "enosis." 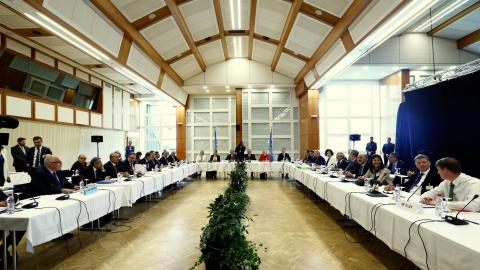