Presiding Judge Hendrik Steenhuis said "no one is above the law" after he and two other judges found Wilders guilty of inciting discrimination against Moroccans in 2014.

A Dutch court on Friday convicted Dutch politician Geert Wilders of inciting discrimination against Moroccans, but imposed no penalty on him.

The charges stem from a 2014 incident in which Wilders led supporters to chant that they wanted "Fewer! Fewer! Fewer!" Moroccans in the Netherlands.

In the trial he was cleared of hate speech charges relating to comments he made in a TV program a week before the incident.

After the ruling Wilders said his conviction was "insanity." He said the three judges who handed down the ruling were "haters" of his far-right Freedom Party, the PVV, and tweeted the following:

Three PVV hating judges declare that Moroccans are a race and convict me and half of the Netherlands.

Reading the decision of the three-judge panel, Presiding Judge Hendrik Steenhuis said "no one is above the law."

"If a politician crosses the line, that doesn't mean free speech is being restricted," he said.

"A crime cannot be protected by the right to free speech."

In a videotaped response to the verdict, which he did not attend, Wilders said: "I will never be silenced." He said the ruling was an attempt to "neutralise the leader of the largest and most popular opposition party in the Netherlands."

Wilders was acquitted in 2011 of similar charges after he compared Islam to Nazism and called for a ban on the Quran. 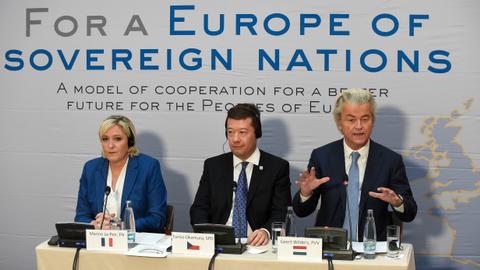