European Union and British negotiators failed to get a breakthrough in the Brexit talks during an all-night session and continued on Wednesday to seek a compromise before a crucial EU summit on Thursday.

European Council President Donald Tusk says that "theoretically" everything should be clear on the issue of Brexit in the coming hours.

European Union and British negotiators failed to get a breakthrough in the Brexit talks during an all-night session and continued on Wednesday to seek a compromise before a crucial EU summit on Thursday.

Speaking to two broadcasters from his native Poland, Tusk told TVN24 and Polsat News, "theoretically in seven to eight hours everything should be clear on the issue of Brexit; negotiations are going on. Everything is moving in a good direction, but with our British partners everything is possible."

"No breakthrough yet in last-minute Brexit negotiations"

British Prime Minister Boris Johnson has told his Cabinet there has been no breakthrough yet in last-minute Brexit negotiations with EU negotiators.

Johnson's spokesman, James Slack, said the prime minister briefed colleagues  that there are still "a number of outstanding issues."

But he said there is "a chance of securing a good deal" at an EU summit that starts on Thursday.

Slack also said that the prime minister is planning to meet with the Northern Ireland’s Democratic Unionist party "in the next few hours."

It would be the third such meeting in as many days as the border between European Union member state Ireland and Northern Ireland, which is part of the United Kingdom, proves a continuing sticking point in negotiations on an EU-UK divorce deal.

Johnson needs the 10 votes the party has in parliament if he is going to have any chance in getting any Brexit deal he negotiates with the European Union over the line.

British and European officials returned to intense negotiations on a draft Brexit deal on Wednesday after late-night talks brought them closer but failed to confirm an elusive breakthrough.

Reports that Britain has softened its stance on the customs status of Northern Ireland in order to clinch an accord at this week's European summit had raised hopes that a chaotic "no-deal Brexit" can be avoided and driven the pound higher.

But a marathon overnight negotiating session in the EU's Brussels headquarters brought them to the eve of the meeting with still some distance to go to agree on the wording of a treaty to govern the terms of Britain's October 31 departure from the bloc.

Irish Prime Minister Leo Varadkar on Wednesday said he remained hopeful that Britain would secure a deal to leave the EU but sticking points remained as a deadline for talks loomed.

"I am convinced that all parties are serious about getting an agreement by the end of this month. There is a pathway to a possible deal but there are many issues that still need to be resolved," he said.

"The teams worked into the night and continue to make progress. The teams will meet again this morning," a UK official said, describing the talks as "constructive."

He and EU officials said the teams would get back to work at around 0700 GMT (9 am local time).

A senior European diplomat said the negotiators had begun to transcribe the British offer into a legal text that could eventually go before the 28 EU national leaders at their European Council summit on Thursday.

But there remain some important differences, he cautioned, while a European official, speaking on condition of anonymity as closed-door negotiations continue, played down hopes that any text would be finalised on Wednesday.

Even if a text is prepared for the leaders this week ⁠— or if, as many observers in Brussels expect, an extraordinary summit is called later ⁠— any deal would have to be approved by a sceptical British Parliament, which holds a special session on Saturday.

By agreeing to a form of customs boundary in the Irish Sea, Britain could allow its province of Northern Ireland to remain under EU rules, prevent a return to a hard land border with EU member Ireland and salvage a negotiated withdrawal.

But Prime Minister Boris Johnson may struggle to convince hardline Conservative eurosceptic MPs and his allies from Northern Ireland's loyalist Democratic Unionist Party (DUP) to accept this concession – less than three weeks before Britain is due to leave the EU.

Barnier had said a text must be on the table by Wednesday if member state governments are to have a chance to consider it before the summit, because the 28 national leaders have no plans to themselves debate the details of the agreement.

But if, as now seems likely, the Wednesday deadline is missed, officials said talks could instead resume next week and a special summit be called just in time for Johnson to fulfil his pledge to lead Britain out of the bloc on October 31.

Barclay said on Wednesday he would not consider accepting a delay to Britain's EU exit beyond the deadline, even if it was only used to tie up the necessary legal requirements of an agreement.

"No, I think it is important that we leave on the 31st of October," Barclay told a parliamentary committee.

European leaders warn they will not let Britain use Northern Ireland as a back door to the single market and Barnier said Tuesday that "it is high time to turn good intentions into legal text."

On Tuesday, German Chancellor Angela Merkel outlined why EU officials are driving a hard bargain and hoping Britain will commit to a "level playing field" in post-Brexit trade and commerce.

"One thing is clear, Britain will develop into another competitor on the doorstep of Europe," Merkel told German industrialists.

"And therefore, the EU will be challenged to become more competitive and to assume geopolitical responsibility."

"The last moment is always a bit later than you think," said one German government official, suggesting Brexit would have to be postponed beyond the end of the month if talks are to reach a successful conclusion.

More than three years after Britain's 2016 referendum vote to leave the European bloc, talks remain stuck on how to avoid customs checks on the border between British-ruled Northern Ireland and EU-member Ireland.

The EU has reservations about London's proposed customs arrangements and the role for Northern Ireland's Stormont assembly in giving consent to the plans.

In London, DUP leader Arlene Foster told the BBC that she wanted to support a deal, but would not do so if she felt it divided Northern Ireland from the rest of the UK and added that without her party's support, "everybody knows" it would not pass in parliament.

If no deal is reached by Saturday, Johnson will fall foul of a British law demanding he ask the EU to postpone Brexit for a third time rather than risk a potentially disastrous "no-deal" departure. 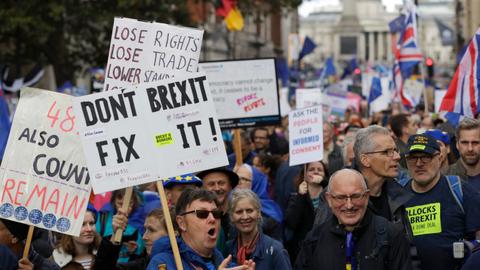