Commissioner for European Neighbourhood Policy and Enlargement Negotiations Johannes Hahn on Tuesday condemned Macedonia's president's move to end legal proceedings against politicians and questioned whether a parliamentary election which is expected soon could be credible.

Hahn said the move had jeopardised the country's prospects of closer relations with the EU and NATO.

"Today's actions of President (Gjorge) Ivanov are not in line with my understanding of rule of law," Hahn posted on his personal Twitter account.

"In light of these developments, I have serious doubts if credible elections are still possible."

"Democracy means compromise and serving the citizens. I call upon all political parties to get back to the negotiating table and work for reforms."

Macedonia has been facing turmoil since February 2015 when the opposition accused then-Prime Minister Nikola Gruevski and his Counter-Intelligence Chief Saso Mijalkov of orchestrating the wiretapping of more than 20,000 people.

"Politics (has) turned itself into who will open more criminal proceedings or submit criminal charges against one another," Ivanov said adding that "The thing is so tangled up that nobody can untangle it."

"I have decided to put an end to this agony for Macedonia," Ivanov told reporters, announcing that he would sign a decree bringing a halt to all legal proceedings against politicians over the wiretap allegations.

Opposition leader from Social Democrat (SDSM) Zoran Zaev rejected to the president's move and called it as a "coup d'etat."

"We want Gjorge Ivanov to resign. If he doesn't do that, he will lead the state to the brink. This today is a coup d'etat. We will use all tools that we have to stop it," Zaev told in a news conference, adding that he would call for a protest against the decision.

After the decision of the president several hundred of protesters gathered, throwing eggs at Ivanov's office and ruling party VMRO-DPMNE headquarters.

After five months of political dispute, both sides agreed on a EU-backed deal called Przino Agreement.

The EU brokered a deal with Macedonia in which a special prosecutor was appointed to investigate the revelations and Gruevski agreed to an early election no later than April 2016, which is now expected in June. The opposition has already pledged to boycott the election.

Gruevski and his centre-right VMRO-DPMNE party denied any wrongdoing.

Shortly before he aired the wiretapping allegations last year, Zaev was charged with conspiring with an unidentified foreign intelligence service to topple the government.

It was not immediately clear whether Ivanov's decision to halt all criminal proceedings applied to Zaev, but the opposition leader said that, in any case, he would reject such a step.

"I neither ask for nor will accept amnesty," he said. 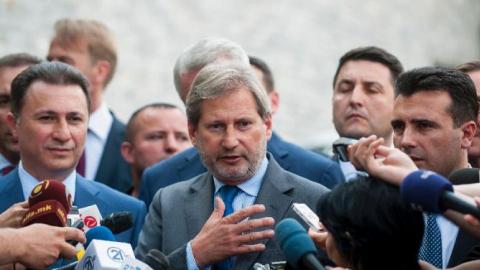