His comments, published in Sunday's Tagesspiegel daily, come as the ex-chancellor is set to meet Tuesday with Hungary's right-wing Prime Minister Viktor Orban, a fierce opponent of Merkel's open-door stance towards migrants.

"Europe cannot become a new home for the millions of people in need throughout the world," Kohl was quoted as saying.

Orban -whose country has erected razorwire border fences to deter refugees- earlier this year said that an uncontrolled influx exposes Europe to the risks of "terrorism, criminality, anti-Semitism and homophobia."

Kohl's own warning is contained in a preface to the new Hungarian-language version of his book "Aus Sorge um Europa" (Out of concern for Europe).

The solution to the migrant crisis, he argues, lies not in Europe but has to come from the regions that are seeing the exodus.

"National policies of the lone-knight variety must be left in the past," said Kohl, considered the father of German reunification, without mentioning Merkel or her policies directly.

Many migrants "come from different cultural environments," he added.

"For the most part they have a belief which is different from the Judeo-Christian beliefs which form part of the foundations of our social order and our values."

Kohl, 86, is very rarely seen in public these days.

He left active politics in 2002. Since a fall in 2008, followed by a stroke, he has suffered from impaired speech and uses a wheelchair. 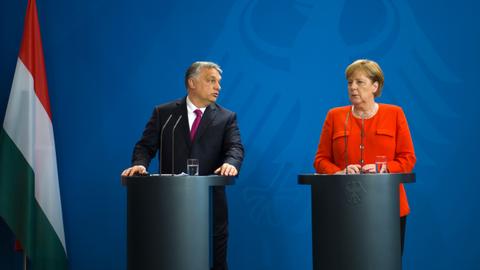