The bans on the full-body bathing suit had outraged rights defenders worldwide.

A definitive decision on the bans is still pending.

Bans on the full-body swimsuits were recently enacted in 26 municipalities throughout France.

The Conseil d'Etat stressed that the bans "seriously, and clearly illegally, breached the fundamental freedoms to come and go, the freedom of beliefs and individual freedom."

Under France's legal system temporary decisions can be made by the Council of State before it takes more time to prepare a judgment on the underlying legality of cases.

The controversial bans were backed by Prime Minister Manuel Valls and former president Nicolas Sarkozy. This month the mayor of Cannes, David Lisnard, said that burkinis are a "symbol of Islamic extremism."

The bans have faced mounting opposition from human rights and anti-Islamophobia groups on the grounds that they restrict human freedom of opinion, religion, clothing and movement.

Height of absurdity: Nice police seem to force burkini-clad woman to remove it and fine her. https://t.co/rhHfOEQ5Dz pic.twitter.com/yQ4egCwjrq

President of the French Council of the Muslim Faith (CFCM), Anouar Kbibech, said he was "concerned over the direction the public debate is taking," citing the "growing fear of stigmatisation of Muslims in France."

After the bans went into effect around 20 fines were handed out and French police demanded that a woman remove layers of her clothing at a beach in Nice. They gave her a ticket for not "wearing an outfit respecting good morals and secularism."

The latest controversy follows multiple past incidents of discrimination against Muslim women. In 2009, a woman in Paris was prevented from swimming in a public pool because she was wearing a burkini. 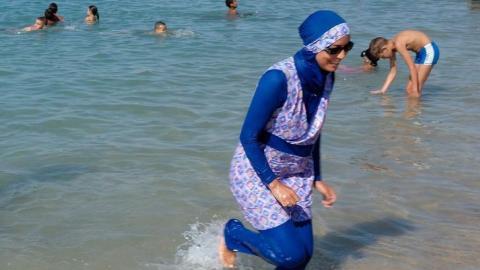