If the parties don't form a coalition, the only remaining options would be for Merkel's conservatives to lead an unprecedented minority government, or a new election.

German Chancellor Angela Merkel embarked Sunday on talks with the centre-left Social Democrats on forming a new government, with leaders stressing the need for speed as they attempt to break an impasse more than three months after the country's election.

Leaders aim to decide by Friday whether there's enough common ground to move on to formal coalition negotiations. Whatever the result, it will be a while yet before a new administration is in place to end what is already post-World War II Germany's longest effort to put together a new government.

Why is there an impasse?

Germany's September 24 election produced a parliamentary majority for only two plausible coalitions: the outgoing alliance of Merkel's conservative Christian Democratic Union and its Bavaria-only sister the Christian Social Union with the Social Democrats.

Or an untried combination of the conservatives, the pro-business Free Democrats and the left-leaning Greens.

The Social Democrats vowed after slumping to their worst post-war election result to go into opposition, so Merkel opened talks on the alternative coalition — which collapsed in November.

The Social Democrats then reluctantly reconsidered their refusal to mull extending the "grand coalition" of Germany's biggest parties. Shortly before Christmas, Germany beat its previous record of 86 days — set in 2013 — for the time from an election to the swearing-in of a new government.

If the parties decide this week that they're prepared to open formal coalition negotiations, that will require approval January 21 by a congress of the Social Democrats.

Party leader Martin Schulz, Merkel's defeated challenger in September, may face a tough job convincing members who so far are deeply sceptical of being junior partners in another "grand coalition." Those negotiations would take weeks.

Further, Social Democrat leaders have promised to hold a ballot of the full party membership on any coalition deal — taking several more weeks.

What are the issues?

The conservatives want to maintain a block that bans refugees and migrants granted a status short of full asylum from bringing their closest relatives to Germany, while the Social Democrats want to end it.

The two sides could also clash over the Social Democrats' call to reform the health insurance system and their differing ambitions for the European Union. Schulz recently advocated aiming for a federal "United States of Europe" by 2025, which goes too far for conservatives.

What if talks fail?

If the parties don't form a coalition, the only remaining options would be for Merkel's conservatives to lead an unprecedented minority government or a new election.

Schulz has said some form of support for a minority government is an option for his party, but Merkel has made clear she wants a coalition. Polls so far suggest that a new election would produce a similar result to the last one.

And who would decide?

The road to either a minority government or a new election involves President Frank-Walter Steinmeier, who so far has opposed a new vote.

The German parliament can't dissolve itself and Merkel can't call a confidence vote as a caretaker chancellor.

Steinmeier would first have to propose a chancellor to parliament, who must win support from a majority of all lawmakers to be elected. If that fails, parliament has 14 days to elect a candidate of its own choosing, again by an absolute majority.

If that also fails, Steinmeier could choose to appoint a candidate who wins the most votes but falls short of a majority — or dissolve parliament. An election would then have to be held within 60 days. 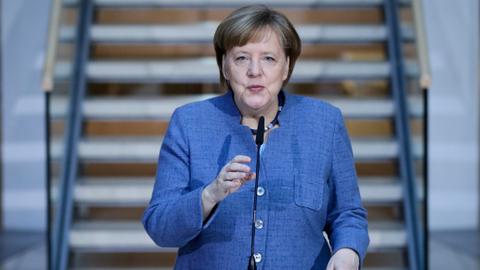