1
Türkiye’s concerns 'all legitimate and must be addressed': NATO chief
2
NATO to massively increase number of forces at high readiness
3
Türkiye seeks a just peace between Russia, Ukraine: Altun
4
G7 leaders vow to stand with Ukraine 'for as long as it takes'
5
India, EU resume free trade talks after nearly a decade

Italy has threatened to prevent vessels sailing under foreign flags from disembarking migrants rescued in the Mediterranean in its ports, saying it was struggling to cope with the crisis.

Italy on Wednesday appealed to the European Union for help in taking in African migrants, even raising the possibility of closing its ports to humanitarian rescue ships to pressure EU partners.

Rome's EU ambassador, Maurizio Massari, met EU Migration Commissioner Dimitris Avramopoulos and told him that "the situation we are facing is serious and Europe cannot turn its back", an Italian government source said.

"The idea of blocking humanitarian ships flying foreign flags from returning to Italian ports has been discussed," another Italian government said.

TRT World spoke with Lucy Hovil of International Refugees Rights Initiative for the latest on the migrants crisis.

That may force EU partners to take them instead because many of the charities that operate rescue ships are based in other EU countries, including Malta and Germany, the source said.

"Italy has reached saturation point," he said, adding that Rome had planned for 200,000 beds for asylum-seekers and those were almost all taken.

Italy is the main point of arrival for mostly African migrants to European shores this year, and more boats are sent out almost daily. All of those rescued off the coast of Libya are brought to Italy, often by private charities.

The NGOs have already faced a fierce campaign to discredit them this year after an Italian prosecutor alleged their collusion with smugglers, an accusation they said was political and designed to thwart their rescue efforts.

Meanwhile, Italy's neighbours have closed their borders to try to keep migrants from moving north as they did in the past, and some EU partners such as Poland and Hungary have refused to host some asylum-seekers to ease the burden on Italy and Greece, another frontline country.

"I wonder whether the proposed measure is legal at all," said Mattia Toaldo, an expert on Libya at the European Council on Foreign Relations.

"Denying docking rights to ships who have rescued people in distress at high seas (a legal obligation for all vessels, including commercial ships) sounds dubious.

"It sounds more like a desperate way to get Europe's attention than a real measure that can be implemented," he said.

More than 10,000 people were pulled to safety between Sunday and Tuesday off Libya, including 5,000 on Monday alone.

"The number of June arrivals is normal. They are high, but they should not be worrying," Di Giacomo said.

An Italian navy boat brought about 700 migrants to the Sicilian port of Pozzallo on Wednesday, including an infant boy who was born on a migrant boat but who died from respiratory problems after he and his mother were rescued, port doctor Angelo Gugliotta said.

Because of the summer heat, some migrants dove off the ship into the water when it arrived in port. Several were carried off on stretchers, including one severely malnourished man, and injuries included gunshot wounds, the doctor said.

"This has been going on for years and it is increasingly dramatic," Gugliotta said.

At the weekend, voters punished Italy's ruling Democratic Party in local elections, opting instead for centre-right rivals led by the anti-immigrant Northern League and four-time former Prime Minister Silvio Berlusconi, who want Italy to take a tougher stance on migration.

While EU members have been at loggerheads for two years now about moving asylum-seekers from Italy and Greece, the bloc's 28 leaders agreed last week the two southern states should get more help to manage arrivals.

The bloc's executive European Commission will give more emergency funding to Italy and wants EU states to put up more money to assist African countries, an EU official said, hoping that better conditions at home will keep people from leaving.

At a meeting in Tallin next week, EU migration ministers will discuss Rome's request to have EU peers let some of the boats arriving with migrants disembark in their ports, the official said. 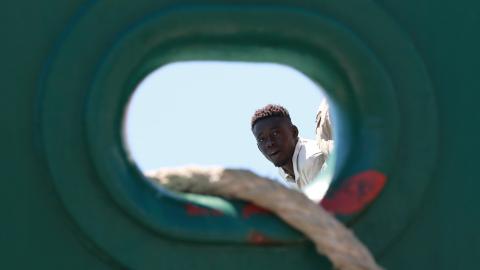 1
Türkiye’s concerns 'all legitimate and must be addressed': NATO chief
2
NATO to massively increase number of forces at high readiness
3
Türkiye seeks a just peace between Russia, Ukraine: Altun
4
G7 leaders vow to stand with Ukraine 'for as long as it takes'
5
India, EU resume free trade talks after nearly a decade