The protests were ignited by the appearance of an official Russian delegation in the Georgian parliament building as part of an assembly of legislators from Orthodox Christian countries.

Thousands of demonstrators crowded outside Georgia's parliament on Saturday night for the third straight day of protests that have kindled tensions in the country and prompted Russia to block air connections with its neighbour.

The throng was mostly orderly but insistent in its array of demands, including the resignation of the interior minister over harsh tactics by police in breaking up a rally on Thursday in which at least 240 people were injured.

The speaker of parliament resigned on Friday.

Animosity toward Russia is strong in the wake of the 2008 war in which Georgia lost control of two Russia-backed separatist territories. Russia now considers those territories independent, but has established a military presence there and Georgians refer to them as Russian-occupied.

The protesters consider Georgia's current government to be overly cooperative with Russia.

The protests also tap into other frustrations. Demonstrators are demanding early parliamentary elections and a change in the system so legislators are chosen fully proportionally rather than the current mix of party-list and single-mandate representatives.

"I am here to protest the Russian occupation that we still remember, that still hurts after 11 years and still is an ongoing issue," said demonstrator Tina Bezhanidze.

TRT World's  Mhairi Beveridge has more on the story.

Moscow's reaction to the anti-Russia sentiment was quick.

President Vladimir Putin on Friday ordered the country's airlines to stop taking Russian citizens to Georgia as of July 8 and the transportation ministry on Saturday said Georgian airlines would banned from Russia on the same date. The bans affect six Russian airlines and two from Georgia.

Georgia is a popular destination for Russian visitors, who are attracted by the dramatic mountains and the renowned wine culture, and the flight ban would be a near-term blow to the country's tourism sector, though experts suggested it could recover.

The moves echo bans that Russia imposed in 2006 on flights and imports of Georgian wine and mineral water as tensions rose between the countries. Those bans were later lifted.

The 2006 Russian bans "at first had a negative effect, but new markets and new contracts were found. I think the same will happen in the tourism sphere," Kakha Gogolashvili of the Georgian tour agency Globus said Saturday.

The Russian association of tour operators says 5,000-7,000 Russians currently are visiting Georgia on organised tours, and twice that many likely are there traveling independently, according to Russian state news agency RIA-Novosti. 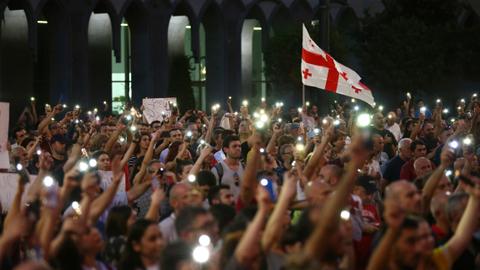