Thousands of people continue their protests in the Macedonian capital after a wiretapping scandal.

Thousands of people gathered for a protest on Tuesday in Skopje, the capital city of Macedonia, after President Gjorge Ivanov announced a decision last week to grant presidential pardons and halted criminal proceedings against dozens of people, including high-ranking politicians, accused in a wiretapping scandal that has gripped Macedonia for months.

The protest first began in the capital, but then spread to other cities of Macedonia. Demonstrators demanded the resignation of President Ivanov.

Last week seven people, including five police officers, were injured and 13 people were arrested after demonstrations in Skopje.

The early election, originally agreed for April 24 , was postponed in February to June 5, is part of a EU-brokered agreement to solve the country's seething political feud.

President Ivanov said last week that he stood by his decision to grant pardons to 56 officials in the scandal despite days of street protests and mounting national and international calls to change his mind.

Ivanov also called for national reconciliation, saying the wiretapping scandal that sparked the crisis "has resulted in endless (acts) of hatred and recrimination."

Macedonia, which is dealing with Europe's refugee crisis, has faced political turmoil since the opposition leader Zoran Zaev accused the former Prime Minister Nikola Gruevski and his counter-intelligence chief, Saso Mijalkov, in February last year of wiretapping of more than 20,000 people, as well as high-level corruption, and interference in the media and judiciary.

The opposition claimed the phone-taps exposed government control over journalists, judges, public sector recruitment and the manipulation of elections in Macedonia.

The government denied the allegations and accused the main opposition leader of spying and of trying to destabilise the country.

Under an EU-brokered deal reached last year to try to end the crisis, a special prosecutor was appointed to investigate the wiretap revelations and Gruevski agreed to an early election, expected in June.

Gruevski distanced himself on Thursday from Ivanov's amnesty. "It is against what we stand for. Those who have done something criminal should answer for it," he said. 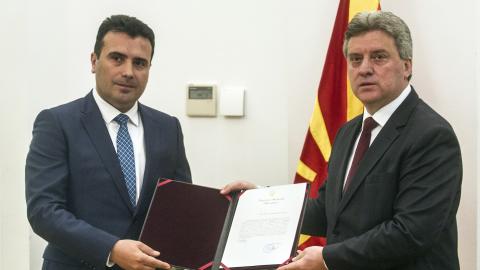