Obama tells British youth not to isolate from world

Barack Obama tells British youth not to pull back from world, one day after warning UK against Brexit

US President Barack Obama implored young British people on Saturday not to pull back from the world, a day after sparking a row by bluntly telling Britain it should remain in the European Union to preserve its remaining global clout.

Obama angered critics of the EU on Friday by warning that Britain would be at "the back of the queue" for a trade deal if it left the club - one of the strongest US interventions in the affairs of a western European democracy since the Cold War.

Speaking to about 550 invited British young people at a "town hall" event on Saturday, Obama sought to pitch a more optimistic message to young Britons, who are considered to be more pro-European, if less active, voters than their parents.

Obama said he wanted young people to reject the cynicism piped towards them by TV and Twitter, and he lauded both the EU and NATO for sustaining peace and prosperity in Europe after centuries of war and strife.

"Think about how extraordinary that is: For more than 1,000 years this continent was darkened by war and violence. It was taken for granted. It was assumed that was the fate of man," Obama said at Lindley Hall in London.

"We see new calls for isolationism, for xenophobia," Obama said. "When I speak to young people, I implore them, and I implore you, to reject those calls to pull back."

Joking about Britain's colonial past, Obama cited a "tea incident" and said that the British had burned down his house - references to the 1773 Boston Tea Party protest and to the burning of the White House in 1814 by British troops.

But he stressed that the two nations had put their quarrels behind them to ensure a more stable and freer world.

Obama's intervention over EU membership was welcomed by Prime Minister David Cameron but it was not immediately clear how far British voters will hear or heed Obama's caution over the consequences of leaving the EU in a June 23 referendum.

A YouGov poll showed that while British voters think Obama has done a good job as US president, 53 percent felt it was inappropriate for Obama to express a preference on how Britain should vote, while 35 percent said it was appropriate.

After a visit to the Globe theatre to mark 400 years since the death of William Shakespeare, Obama answered 10 questions from the youth audience on issues ranging from the peace in Northern Ireland to the rights of non-binary gender individuals.

While Obama's warning about the prospects of a post-Brexit trade deal with the US led television news broadcasts in Britain, EU membership was not raised during the question-and-answer session that lasted over an hour.

Obama's warning over trade was especially sensitive in Britain because opponents of the EU have argued that the world's fifth largest economy could prosper by striking bilateral deals if it cut itself free from what they cast as a failed German-dominated experiment in European integration.

"His meddling stems not from his concerns for Britain or, indeed Europe, but from his own - America's - interests," former British finance minister Norman Lamont, a supporter of a British exit, wrote in the eurosceptic Daily Mail newspaper.

But some of the participants in Obama's youth meeting were positive about Obama's intervention.

"It was fair, it was true, it is something that needs to be talked about for some of us that haven't decided where to go," said Abdirashid Fidow, a 25-year-old charity worker.

"How are we going to be special if you're going to put us at the back of the queue? I have seen a lot of friends of mine change their minds after Obama spoke yesterday."

Selected partly by a lottery run by the US Embassy and partly by school and university groups that were given blocks of tickets, the Britons gave Obama a standing ovation as he closed the session to the punk rock song "London Calling" by the Clash.

"I recognise that a US leader has gone further than ever before in intervening in another democratic process outside of their own jurisdiction," said James Langford, a 25-year-old strategy consultant. "That is extraordinary in itself."

"I don't believe that anyone should change their mind on the sole basis of that decision. It doesn't annoy me," Langford said. "He hasn't told us how to vote, he's advised us what he thinks the US's perspective is." 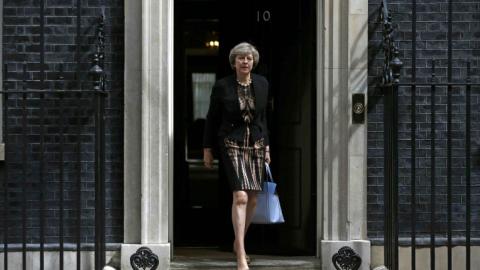 Theresa May in lead to become Britain's next PM