Massive protests by thousands of women force Poland's right-wing dominated parliament to withdraw its support for plans to ban abortion.

Polish lawmakers overwhelmingly voted down a bill for a near-total ban on abortion on Thursday. The governing Law and Justice Party (PIS) announced its opposition to the measure after a huge number of women hit the streets on Monday.

If the proposed plans were accepted by the parliament, abortion would have been allowed only in the event of a direct danger to the mother's life. According to current law, abortion is legal in cases of rape, incest or serious health issues for the mother or when the baby is likely to be permanently handicapped.

"The PIS has backtracked because it was scared by all the women who hit the streets in protest," liberal MP and former prime minister Ewa Kopacz told reporters following a parliamentary committee vote on Wednesday.

Nearly 100,000 women dressed in black joined protest rallies across Poland against the plans to tighten the country's abortion rules. The right-wing PIS seemed to favour banning abortion before the massive protests.

The parliamentary justice and human rights committee, which reviewed the proposed legislation, strongly suggested that lawmakers should reject the bill. The proposal was introduced by an independent think-tank.

The existing Polish abortion law, which was passed in 1993, is considered among the most restrictive in Europe. The Newsweek Polska magazine released last month a poll which showed that 74 percent of Poles want to keep the current law.

The rejection of the plans is illustrating a worrying trend for PIS, which is a socially conservative, eurosceptic party. They came into power last October with pledges to decrease economic imbalances by boosting the state's role in the economy.

Indeed, some of the women on the streets had previously voted for the party.

"PIS continues to back the protection of life," the FIS leader Jaroslaw Kaczynski told parliament. "And it will continue to take action in this respect but it will be considered action."

Adding to the drama, Poland's influential Catholic Church initially gave the initiative its seal of approval earlier this year, though its bishops have since opposed jailing women.

The rejected bill had a clause which will increase the maximum jail term for illegal abortion practitioners from two years to five.

The country of 38 million people sees less than 2,000 legal abortions a year. But women's groups estimate that another 100,000-150,000 procedures are performed illegally or abroad. 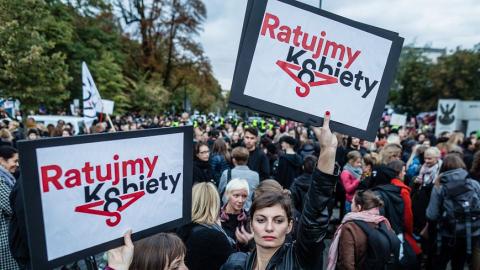